Home
My Voice
Maintain the festival purity by traditional cultural activity during the Navratri!

Maintain the festival purity by traditional cultural activity during the Navratri! 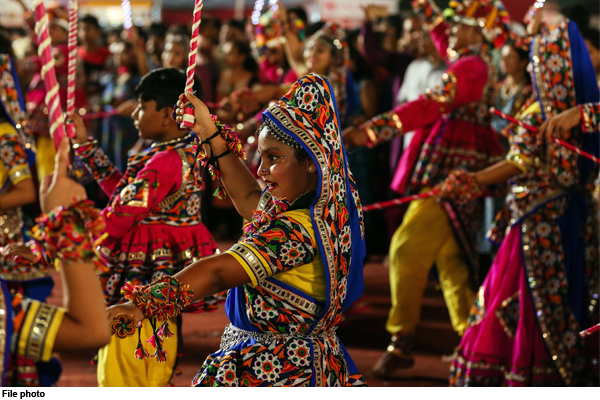 Garba is an important method of performing religious programs in various provinces during Navratri. In the past, only Goddess, Krishnalila and Sangeet songs were sung during the ‘Garba’ dance. In the present times, the worship of this collective dance of God has brought distortions. ‘Rimix’, ‘disco-dandiya’ is played in place of garbage for entertainment in obscene gestures to the beat of Western music or songs of movies. Adultery etc. is also done by making garbe for the purpose. Improper acts like consumption of tobacco, drinking, noise pollution etc. are also done at the place of worship. Originally celebrated as a religious festival, the event has received a commercial appearance. This type is to harm religion and culture. To prevent these offenses, it is necessary to do proper work, that is, to perform the necessary religious rituals according to time.

Can goddess mother grace us by playing garba in religious method in this way?

Traditional garba as a goddess : When we revere the deity with fervent gesture, only then we will be able to get his grace. Not by acts like incest in Garba dance, but by devotional worship, the devotee is blessed with full devotion. That is why in the Hindu religion, playing garba is considered a worship of the Goddess. In this, devotional praise of the Goddess is performed.

At this time, in front of the Goddess, with traditional emotional dance, they also make rhythmic sound with applause and small poles. The original traditional garba dance consists of three applause. The first clap is played by leaning down, the second clap standing up and the third clap raising the hand.

At this time, traditional soulful dances are performed in front of the Goddess. At the dance, three applause are played at each level. And also make rhythmic sound with small sticks. When playing garba, make a circle. Sing songs or bhajans of Saathi Devi.

In this way, singing hymns and dancing in applause is a form of virtuous worship. In this worship system, Shri Durgadevi is awakened by applause. And invoke to take the form of antidote to work in the universe.

Stop disrespecting goddess: Nowadays the Gods and Goddesses are being disrespected by pictures, dramas, advertisements etc.

Example of contempt in reference to the Goddess:

Hindu painter M. F. Husen drew naked pictures of the Hindu deity for public sale; The gods are criticized through lectures, books, etc.; Merchants use gods as models in advertisements for their products; The deities are begged by wearing costumes.

Greece, a Greek company called ‘Southern Comfort Whiskey’, featured a bottle of whiskey in eight hands of Sridugadevi in ​​an advertisement. Hindu Janajagruti Samiti sent prohibition letter to the Ambassador of Greece in India. Due to this protest, this picture was removed by the company.

In the first advertisement in the drug advertisement of a mosquito exterminator named ‘Cinq sur Cinq’ from a company called ‘Bayer’, Kaliman was shown ten arms in the first picture. In the second picture, Devi has only two arms unarmed as she has a mosquito repellent to the Bayer Company! On receiving information about this insult, the Hindu Janajagruti Samiti expressed its anger by sending a prohibition letter to the company. The company apologized with immediate attention to the prohibition. The company sent the committee to the letter, saying, “We apologize for the inconvenience and inconvenience caused to you.” We respect Hinduism. Yours reliable – Mark Clafen.

If the idol is made according to scripture, then only the element of the deity is attracted.

Keep in mind, where the name of the deity means name, there is also their power, so it is unfair to do so. Devotion is the foundation of worship to the gods. Disrespect of the gods hurts reverence. Therefore this type of disrespect of the gods leads to deprivation. It is necessary to practice preaching according to time. This deity is worshiped on the social level, that is, the social level. Preventing such incidents and guiding others in this context is a service to God. It is a part of spiritual practice. To prevent this irony, Sanatan Sanstha and Hindu Janajagruti Samiti have been running Janajagruti Abhiyan through various means. You should stay awake in this context and try in this direction. In order to stop this apostasy, Goddess will definitely give us strength, intelligence and the ability to retaliate against injustice, that is, we will eliminate the obstacles in the practice.