Home
Sports
Neeraj is like our son, want to see him and Arshad compete in packed stadium in Lahore: Nadeem’s coach Syed Hussain

Neeraj is like our son, want to see him and Arshad compete in packed stadium in Lahore: Nadeem’s coach Syed Hussain 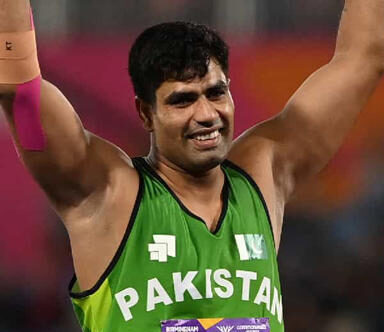 Pakistan’s javelin player Arshad Nadeem’s coach Syed Hussain Bukhari has showered love on Indian superstar Neeraj Chopra. Bukhari said that Neeraj is like a son of Pakistan and he wants to see India’s Golden Boy competing with Nadeem in a packed stadium in Pakistan in future. After a stellar performance in the men’s javelin throw final, Nadeem on Sunday won the elusive gold medal at the Commonwealth Games 2022.

Nadeem set a new Commonwealth Games record with a stellar throw of 90.18m in the final as he defeated defending world champion Anderson Peters and others to top the podium. The Pakistani star also became the first South Asian to cross the 90m mark in javelin throw, defeating his arch-rival Chopra to achieve the feat.

Nadeem and Chopra share a great rivalry on the field but they remain good friends away from it and share a great bond between them. Much has been said about their friendship since Chopra and Nadeem won gold and silver medals respectively at the Asian Games 2018. Nadeem crossed the 90m hurdle during the Commonwealth Games 2022, Chopra was not in action in the competition on Sunday.

Speaking fondly of Chopra, Nadeem’s coach Bukhari said that Pakistan would shower the Indian javelin star with the same love as it did to the legendary Milkha Singh, when he defeated Abdul Khaliq at Lahore in 1960, if he Pakistan wins.

“Most of the time, Arshad trains at Jinnah Stadium in Islamabad and Lahore, I wish Arshad and Neeraj would compete in a packed stadium in Lahore or Islamabad. Neeraj is also like our son. I promise you as a Pakistani that if Neeraj wins, we will give him the same love we showered on Milkha Singh ji when he won against Abdul Khaliq in Lahore in 1960. The athletes share a common bond of love for sports,” Bukhari was quoted as saying by The Indian Express.

Bukhari believes that Nadeem’s success can do for Pakistan what Neeraj did for India at the Tokyo Olympics last year. The javelin coach said he has recently seen a rise in youngsters taking up the javelin and believes that what Nadeem has achieved so far in his career will be more motivated to play the game.

“After Arshad topped the Asian Games bronze and Tokyo Olympic qualification, I can say that I get to see 30-40 javelin throwers at almost every training ground in Lahore. In recent months, I have seen youths come from Khyber Pakhtunkhwa and near the Pakistan-China border regions to inquire about tests in Lahore. What Neeraj did for India, Arshad’s Olympic participation and today’s record can do the same in Pakistan,” Bukhari said.