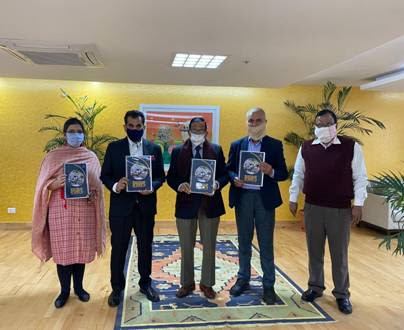 New Delhi: NITI Aayog today released a compilation of the methods of various states and union territories of the country to control and manage the Covid-19 epidemic, in detail regarding the various steps taken by different states, districts and cities. Information is given. The compilation was released by NITI Aayog member Dr. VK Paul, Chief Executive Officer (CEO) Amitabh Kant and Additional Secretary Dr. Rakesh Sarwal. The world has been facing an unprecedented public health crisis in the form of Covid-19 during the past several months. The state and union territories have equal participation with the central government in the management of the Covid-19 epidemic in the country.

In the preface of the compilation, NITI Aayog CEO Amitabh Kant wrote,
“Much can be learned from the methods adopted in the world to combat the epidemic, but it is equally important to pay attention to effective measures at the ground level. Rather than asking each state to repeat a task, it would be far better to propagate and disseminate such practices so that they learn from each other and help each other find solutions to common problems. “

The NITI Aayog contacted all states and union territories via e-mail and telephone to compile the methodology and urged them to share the practices that they believe would limit Covid-19 and this Proved useful in the management of epidemics. Additional information was provided by some states even during the review meetings taken by NITI Aayog member (Health). In addition to the information received directly from the state and union territories, a detailed review has also been made available in this document as a supplement.

The methods included in the compilation are divided into six parts: (1) Public health and treatment response (2) Operating mechanisms (3) Digital health (4) Integrated model (5) Welfare of migrant and other sensitive groups (6) ) Other methods. Summary of the Government of India occasional guidelines have also been included wherever used in the above categories.

The methods adopted by states and Union Territories in the fight against Covid-19, ranging from preparing a detailed map of routes to discovering contacts and operating mobile vans to provide essential health services to the people in their homes. Procedures are included. Many states and union territories have intensively used modern technology such as robots to deliver food, water and medicines to patients in hospitals. Training of health workers was provided in a virtual manner. Start-ups have been pioneers in many technology innovations such as developing the app to provide telemedicine services through them. Civic organizations also took active participation in setting up control rooms for covid management, supplying food to households and motivating self-help groups to manufacture masks and sanitizers in close collaboration with state governments and district administration.