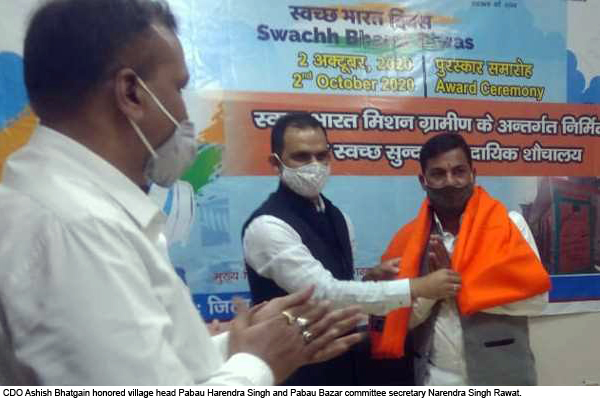 According to the information, Ashish Bhatgain, Chief Development Officer at NIC located at district headquarters Pauri, honored village head Pabau Harendra Singh and Pabau Bazar committee secretary Narendra Singh Rawat. The CDO said that the award has been presented online by the Central Government. As a prize, the citation and trophy will be received by post to the Gram Sabha. Deepak Rawat, the manager of the Swajal project, said that in Pabau town, an application was made three months ago to include the toilet built at the cost of 11.80 lakh last year in the award category. The central team then inspected it.

He informed that a staff has also been deployed for cleaning the toilets in collaboration with Pabau Bazar Committee. Toilets are built in women and men blocks. It also has sanitary napkin vending machines and insulator machines for the convenience of women.

The Central Government had launched three missions – Swachh Sundar, Community Toilet Campaign and Dirt Free India. Gujarat secured the first position under the Community Toilet category, while Tirunalveli of Tamil Nadu received the first prize for cleanliness at the district level. On the other hand, Khacharoud block of Ujjain district got first prize, Chinnanoor village in Tamil Nadu got the top position at Gram Panchayat level.