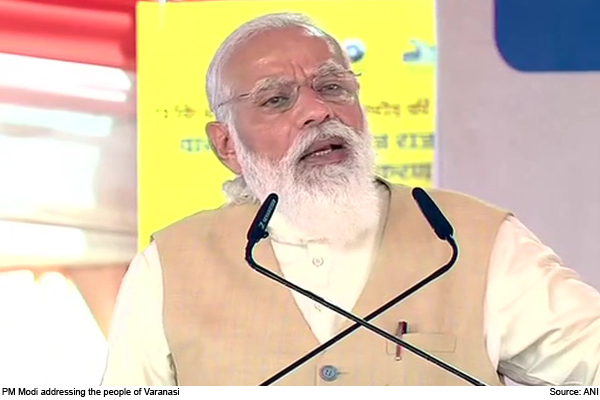 New Delhi: Prime Minister Narendra Modi reached his parliamentary constituency Varanasi on Monday, where he will inaugurate several infrastructure projects and participate in a Dev Deepavali program. Shortly after landing at Babatpur airport, PM Modi arrived at Khajuri for his first public engagement, where he dedicated the Chadi Handia (Prayagraj) -Rajtalab (Varanasi) section of National Highway 19 to the nation.

Varanasi preparations have been made in Varanasi for Prime Minister Narendra Modi’s visit. All arrangements have been made from the cleanliness of the Ghats to Rang Rogan. Special care has also been taken for security. PM Modi Dev will light the first lamp of Deepawali. During this time, the Ghats of Varanasi will illuminate 15 lakh diyas. Please tell that PM Modi has come to Varanasi for the third time in his second term. PM Modi also inaugurated the six-lane National Highway 19. This road will connect Varanasi to Prayagraj.

PM Modi targeted the opposition over the farmer movement. He said, “If the government did not like any decision, then there was protest earlier. But now the basis of protest is not the decision, but by spreading confusion, it is being made the basis. The decision is fine but do not know what will happen later. Then it is said that this will happen, which has not happened yet. What has not happened yet, which will never happen, such things are being done. “

The Prime Minister said, “Varanasi’s fresh vegetable is reaching Dubai and London. This export is done by air. Even the smallest farmer is benefiting. Work is also being done on how to get maximum transport of the produce of the farmers. How much the farmers are benefiting from the efforts of the government and modern infrastructure, the finest example of which is black rice from Chandoli. “

PM Modi further said, “This rice is bringing prosperity to the farmers’ home.” The use of black rice was started two years ago. 400 farmers were given to grow black rice. The normal rice sells for 35-40 rupees. Black rice is selling for up to Rs 300. Black rice has also got overseas market. This rice is exported to Australia for the first time. While paddy MSP is Rs 1800, black rice is 8500 per quintal. 1000 farmer families are cultivating black rice in this season. “

Ghats were decorated before PM Modi’s arrival in Varanasi. Cleanliness ranged from clean to colored. Ghats were beautified with flower garlands. PM Modi will light the first lamp of Dev Deepawali here. During this time, about 15 lakh diyas will be illuminated in 84 ghats of Kashi.