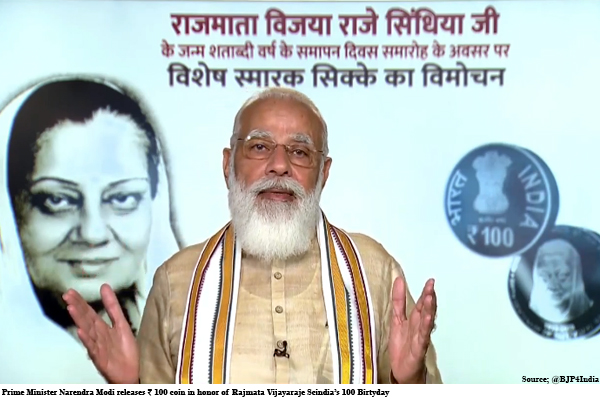 New Delhi: Prime Minister Narendra Modi has released a commemorative coin of Rs 100 through a virtual programme. The coin has been launched to honour Vijaya Raje Scindia, the Rajmata of Gwalior.

The coin has been issued on the occasion of the birth centenary of Vijaya Raje Scindia. This commemorative coin has been designed by the Ministry of Finance. The launch programme was attended by the PM, members of the family as well as people from other parts of the nation.

On the other side, ‘India’ is written in Hindi and English along with the sign of the Ashoka Pillar. Rs 100 is written on the same side.

The Rajmata was one of the founding members of the BJP. She was the Rajmata of Gwalior as well as a leader of the Jana Sangh. Considered one of the prominent faces of the BJP, she was very vocal on Hindutva issues.

Yashodhara Raje expressed gratitude after the release of this commemorative coin and thanked the Prime Minister through Twitter.