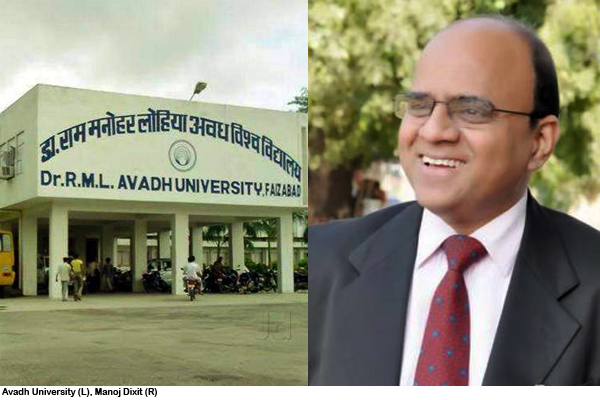 Ayodhya: Dr. Ram Manohar Lohia, former Vice Chancellor of Awadh University, Professor Manoj Dixit has been charged with serious corruption charges. Sources in Raj Bhavan have revealed that during his tenure at the university, Processor Dixit had covered all the boundaries of corruption and darkness. Please tell that the current Vice Chancellor Professor Ravi Shankar Singh has informed the Raj Bhavan after taking charge that the expenditure of only Rs 2 crore has been shown in the tender of 30 crores. Out of 30 crores, 28 crores former patriarchs and their favorites have belied.

Sources in Raj Bhavan revealed that Manoj Dixit, a professor at Awadh University, had fraudulently made over 300 appointments during his tenure. Not only this, Dixit, during his vice-chancellor’s tenure, broke all the FDs of the university and lost all the money.

The Raj Bhavan has become alert as soon as the matter comes to light. The sensation has spread to university officials and the campus. For the last 3 days, churning is going on in Raj Bhavan regarding this serious corruption case. Gupta, Additional Chief Secretary to the Honorable Governor Anandiben Patel, has taken this matter of corruption very seriously. Strict orders have been given to the Vice-Chancellor of Awadh University and the Registrar for clarification by calling 2 times in the last 3 days.

It has also been learned from the sources of Raj Bhavan that important officers are also in various positions in Manoj Dixit’s tenure. Now only after investigation, it will be known which officials were involved in this corruption with Dixit.

The corruption case in Awadh University has become very complicated. There are chances of getting neck of many important officers and employees. It is worth noting that the university administration has not been able to provide remuneration for the last 3 years even to the teachers and staff who have done the exam duty in various colleges affiliated to the university during the exam tenure for the last 3 years, due to which there is a lot of anger among the teachers and staff.