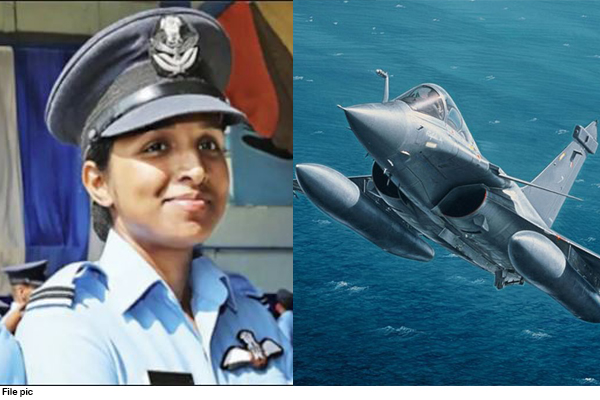 New Delhi: Women are coming forward in every field and creating history. Another name in this episode is the joining of Flight Lieutenant Shivangi Singh. Shivangi is set to become India’s first female fighter pilot to fly Rafale aircraft, which was formally inducted into the Indian Air Force on September 10, officials familiar with the matter said on Wednesday. It is a coincidence that in December last year, another woman named Shivangi became the first woman pilot of the Indian Navy.

Shivangi Singh, who hails from Varanasi, Uttar Pradesh, is currently being trained to fly Rafale, the IAF’s newest fighter aircraft based in Ambala. She is undergoing conversion training to fly the Rafale jet and will soon join Ambala’s No. 17 Squadron, also known as the ‘Golden Arrow’.

On the condition of anonymity, an official said that Shivangi Singh is one of the 10 women fighter pilots of the Indian Air Force who joined the Air Force in 2017. She has been flying MiG-21 Bison aircraft since joining the IAF and most recently her posting is at a combat base in Rajasthan.

10 women were commissioned as fighter pilots to join the Air Force combat fleet, an unprecedented event in the history of the Air Force in 2015. The IAF is operating its Rafale fighter aircraft in Ladakh, where forces are on high alert, amid tensions along the border with China. Officials said the current fleet of 5 Rafale fighter jets of the Indian Air Force is fully operational and fully prepared to carry out any mission.

However, Flight Lieutenant Shivangi Singh will make a formal entry into the 17 ‘Golden Arrows’ squadron at the Ambala base of the Air Force as soon as he completes ‘conversion training’. Explain that a pilot needs to take ‘conversion training’ to switch from one fighter jet to another fighter jet. However, flying the Rafale for Shivangi, which has flown the MiG-21S, will not be a challenging task as the MiG is the world’s fastest landing and take-off speed with a speed of 340 km per km.

Flight Lieutenant Shivangi Singh studied at Banaras Hindu University (BHU). She is part of the second batch of women pilots who joined the IAF in 2017. The Indian Air Force has 10 women pilots flying the fighter plane who have undergone rigorous training to fly supersonic jets. Explain that a pilot costs about Rs 15 crore for training.