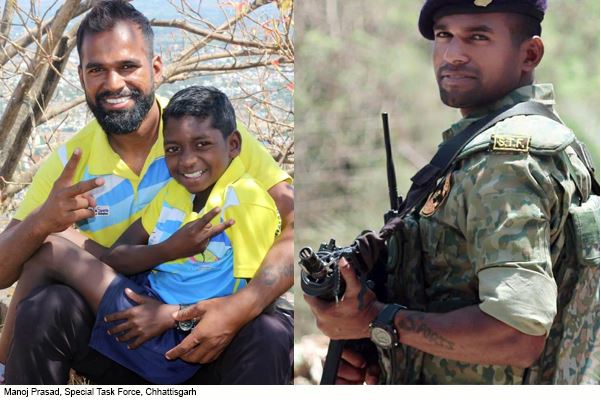 Raipur: This is not a story, it is a true goal of a jawan, skilled and sporting spirit, who dedicated his life to elevate the poor, forest dwellers of Vananchal to the pinnacle. Special Task Force Jawan Manoj Prasad of the Chhattisgarh Police who wrote ‘Malkhamb’ in golden letters in the sports world of Chhattisgarh.

Starting the MALLAKHAMB game in Jagdalpur-Narayanpur was not easy. All the children who were taught Malkhamb belong to the inaccessible area of ​​Abujhmad. They did not know anything about Malkhamb, Manoj Prasad recognized his strength and skill. It was his job to trained these players throughout the day, to overcome their shortcomings. He teaches these poor children the best tricks of the Malkhamb game. He taught these children Malkhamb tricks and made them gold medalists at the national level.

Manoj Prasad has taken the most risk in his life, to take the talent of these children in front of the world. For the last 4 years, Manoj did not visit does his home on holidays and gives training to those poor children in the morning and evening without any monetary benefit. His dutifully spends all week in the forest facing rain and storms. Despite not getting nutritious food, he does duty for 3-4 consecutive days in the mountains and forests without any complaints. However, he gets some days rest even during duty time. But that was not sufficient time for practicing Malkhamb.

However, Manoj Prasad did not give up. He gets up at 4 in the morning and reaches the school 10 km away, where he teaches the children and then makes them run for warm-up and get Malkhamb practiced.

Even after such a tiring and busy schedule , he did not give up and he is engaged to fulfill his passion. There was no entertainment, no birthday, no wedding, no festival nor any kind of party in his life.

Due to duty and training of children, they do not get time to go anywhere and they are not allowed to go outside the camp. They are also not allowed to keep their family in the camp. For this reason Manoj also married a girl from Narayanpur, so that he would be allowed to live with the family. He lives in Narayanpur with his wife, for which he has got permission from his department. Manoj Prasad hails from Ballia district of Uttar Pradesh. His parents still live there. He has not met his parents for the last 4-5 years. Manoj says that when his dream of taking children to the Olympics will be fulfilled, then only he will meet his parents.

Till now Manoj has taught Malkhamb to 400 boys and girls without any administrative help. He took those children to competition in big cities like Delhi, Mumbai, Gujarat, Andhra Pradesh, Tamil Nadu, at their own expense. He also have to made arrangements for the children’s food and drink. On the other hand, it was not easy to carry children’s clothing, shoes and expenses of their education as well as to win the gold medal by beating the players of states like Maharashtra and Madhya Pradesh.

Government should also pay attention to local games. Central and state governments are spending crores of rupees on foreign sports, but the governments are neither giving any incentive nor giving any financial help for the local games. If the government shows interest in these games and those who are engaged in these games shall get little bit help from govt which may encourage these trainers and children so talented children will come further illuminate the name of the country.

Recently, these children got scholarship of 13 lakh 20 thousand by the Government of India. Their aim was to make these children a teacher in sports world by obtaining a degree like B.P.Ed, M.P.Ed through sports so that this game can develop.

However, the young man who worked hard and sacrificed to bring these poor children to this place is still waiting for help from the government and administration. Manoj Prasad has given Abuzhmad of District Narayanpur an identity across India, but when will the government recognize his talent.