Storm in Bay of Bengal, possibility of heavy rains in 5 states, Red Alert in Kerala-Andhra 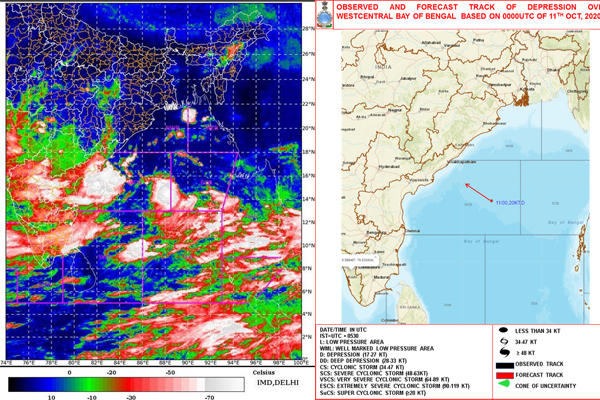 New Delhi: The Indian Meteorological Department (IMD) has predicted heavy rains in 5 states of the country during the next 24 hours, IMD said that at present there is a low pressure area over the Bay of Bengal, which is next There may be a deep pressure in 24 hours, due to which there is a possibility of storm in many states of the country, the department has issued an alert of heavy rain in Andhra Pradesh, Telangana, Karnataka, Madhya Maharashtra, Vidarbha and Odisha. Coastal areas may receive up to 20 cm of rain.

According to the Meteorological Department, due to the creation of this low pressure area, heavy rain is possible in Andhra Pradesh, Karnataka, Telangana, Madhya Maharashtra, Vidarbha and Odisha. There may be up to 20 cm of rain in the sea areas of these five states. In view of this possibility of heavy rain, a warning has been issued.

On Sunday, the India Meteorological Department has informed that the southwest monsoon is unlikely to return from the rest of the country by next week, which will further increase the rainy season. The low-pressure area over the Bay of Bengal could turn into deep pressure in the next 24 hours and cross the northern coast of Andhra Pradesh between Narasapur and Visakhapatnam on the night of 12 October. Apart from Andhra Pradesh and Telangana, due to this, the interior parts of North Karnataka, Madhya Maharashtra, Vidarbha and Odisha may receive rain on October 13.

According to the Cyclone Warning Department of India Meteorological Department (IMD):

Recent satellite-based photographs and ships and marine signals available in the region revealed that a low pressure area was formed in the east-central region yesterday and a pressure zone is forming over the Bay of West Bengal adjacent to the southeastern Bay of Bengal. It is today i.e. 11 October 2020 at 0530 hours Indian time at 15.3 ° latitude and longitude 86.5 ° E, about 430 km southeast of Visakhapatnam (Andhra Pradesh), 490 km southeast of Kakinada (Andhra Pradesh) and 520 km south. -Focuses in the East.

It is very likely to move west-northwest during the night of 12 October 2020 and cross Narasapur and Visakhapatnam along the north Andhra Pradesh coast.

On 12 October, the northwest Bay of West Bengal and adjoining west, southwest Bay of Bengal can blow at a speed of 50-60 kmph. Apart from this, along with Andhra Pradesh coast, Odisha-Tamil Nadu and Puducherry coasts can also move from 55-65 kmph to 55-65 kmph.