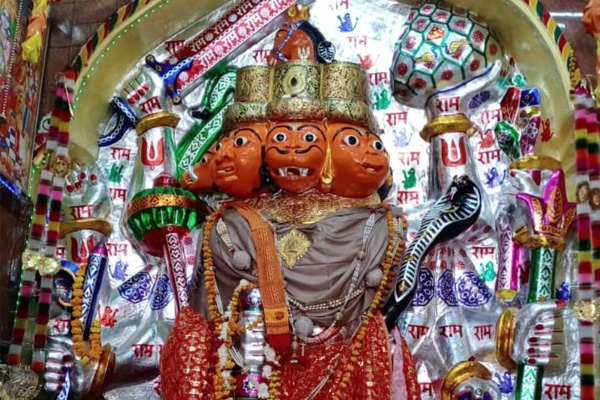 In Hanuman Chalisa, if you are in a lot of trouble, then if you have darshan of Hanuman ji on 8 Tuesdays, then all your troubles will go away. There is an ancient Panchmukhi Hanuman temple in Jodhpur. It is said about the giant statue of this temple that it is self-styled and that Hanuman ji takes away all the troubles and pains that he takes at the rate of Panchmukhi Hanuman ji. Devotees come to this temple every year, but there is a huge gathering of devotees on Tuesdays and Saturdays.

This temple was established before the establishment of Jodhpur. There is also a statue of the goddess of Hades under the feet of the giant Panchmukhi Hanuman ji.

People’s faith in this Panchmukhi Hanuman temple is such that they are in any disease or at any age, they definitely come to the temple and after coming to the temple they get such peace, as if they have achieved everything. Jaggery is offered to Hanuman ji in this temple. Along with this, betel leaf is offered to Hanuman ji. It is believed that Hanumanji himself takes up the task of protecting the devotee who has come by offering beeda and his fleet is crossed.

Why did Hanuman ji take Panchmukhi Avatar? This avatar is also called Vamana avatar. There is also a story behind this which is recorded in religious texts, Ramayana and History. There was a war going on between Lord Rama and Ravana, during that time another brother of Ravana, Ahiravan, who lived in Hades, took away Lord Rama and Lakshmana. During that time Hanuman ji took the form of a fish and reached Hades and freed Lord Rama and Lakshmana from the captivity of Ahiravan. It is said about Ahiravan that there were 5 lamps burning in Hades. No one could do anything for Ahiravana as long as he lit the lamp, so Hanuman ji took the incarnation of Panchmukhi and extinguished the five lamps simultaneously. After that ended Ahiravana and won.