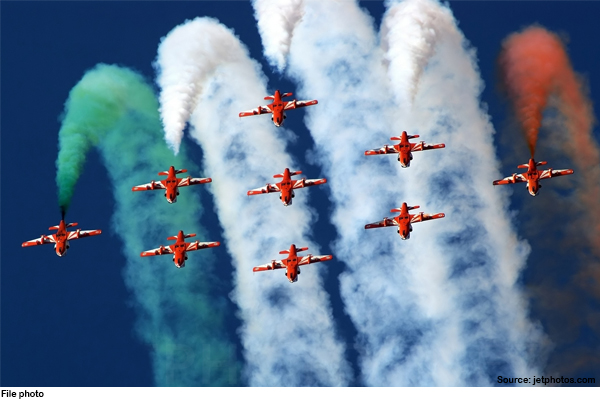 New Delhi: The Indian Air Force is celebrating its 88th Air Force Day on Thursday, 8 October. Spectacular parades and grand air shows are organized on the occasion of Air Force Day. Like every year, this time also the Air Force will display its bravery at Hindon Base. Air Force aircraft will be seen doing amazing tricks in the air. Thousands of people come to see these tricks on Air Force Day. However, due to various restrictions due to the Corona period, fewer people joined. Let us know about the history and importance of Indian Air Force Day.

October 8 is celebrated as Air Force Day because on this day, the Air Force in India was officially formed to assist the Royal Air Force of the United Kingdom. In April 1933, the first squadron of the Air Force was formed, consisting of 6 AF-trend officers and 19 soldiers.

After participating in World War II, the Air Force in India came to be called the Royal Indian Air Force in the mid-1940s. The Indian Air Force also played an important role during World War II. After independence, the word ‘Royal’ was changed from the name of the Air Force to just ‘Indian Airforce’. Started in 1933 with six officers and 19 airmen, this air force is now the fourth largest air force in the world. For several decades until 2005–06, Air Force Day’s main events, parades and flypastes were carried out at Palam airport. But due to increased air traffic, it was shifted to Hindon Air Force Base in Ghaziabad.

The main event at Hindon Air Force Base includes a parade by men and women air warriors. It also has a prestige ceremony where medals are placed by the Chief of Air Force (CAS) on the uniforms of the medal recipients. Every year, apart from television, a large number of serving and retired, air warriors and their families and civilians also attend this ceremony. The day’s ceremonies are traditionally held by the CAS, with top government leaders and brass.

The flypast features an aerobatics display as well as a display of various fixed wing aircraft and helicopters. The final rehearsal of the event was held on Tuesday. This year, Tejas joined the newly inducted Rafael Jet Show along with LCA, MiG-29 and 21 and Sukhoi-30. It also included helicopters like Mi17V5, Mi-35, ALH Rudra, Chinook and Apache and transport aircraft such as C-17 Globemaster, C-130, IL-76 Gajraj. Suryakiran Fixed Wing Aerobatic Team and Sarang Helicopter Aerobatic Team were also major attractions.

Before independence, the Air Force worked under the Army. The credit for ‘liberating’ the Air Force from the Army goes to Air Marshal Sir Thomas W. Elmhurst, the first Commander-in-Chief of the Indian Air Force. After independence Sir Thomas W. Elmhurst was made the first Chief of the Indian Air Force, Air Marshal. He held this post from 15 August 1947 to 22 February 1950.

The motto of the Indian Air Force is ‘Nabhru Sprishnam Deeptam’. It is taken from the 11th chapter of the Gita. This is a part of the sermon given by Lord Sri Krishna to Arjuna in Kurukshetra during the war of Mahabharata.