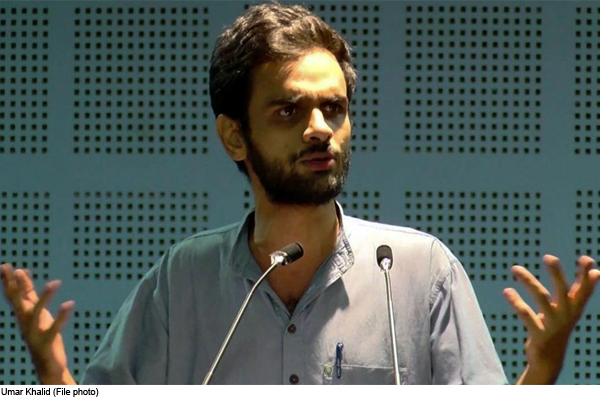 New Delhi: Jawaharlal Nehru University (JNU) alumnus leader Umar Khalid, who was arrested in February this year in North East Delhi under the Anti-Terrorism Act Unlawful Activities (Prevention) Act in a case related to communal violence, was on Monday remanded in police custody for 10 days. The police had pleaded that they have to interrogate the student leader about several facts.

Additional Sessions Judge Amitabh Rawat allowed the police to interrogate Umar Khalid in custody and said that this is an appropriate case for police custody remand. Investigators alleged that during the interrogation, the support of several other radical groups or organisations opposed their active participation in CAA / NPR / NCR, resulting in the re-confirmation of the recent riots.

“Keeping in mind the nature of the case and the role of accused Umar Khalid, who has so far been protesting the CAA (Anti-Citizenship Amendment Act) / NPR (National Population Register) / NRC (National Register for Citizens) with regard to conspiracy and involvement in the protest,” the judge said in his order.

“The riots took place with the support of several radical groups / organisations and the fact that the accused Umar Khalid has been demanded to be detained for the huge amount of technical data as well as the material that came up during the investigation, I think an effective and for allowing the present application for a 10-day police remand of the accused to carry out a proper investigation, this is an appropriate case, ” the judge said.

Police arrested Khalid under the Unlawful Activities (Prevention) Act (UAPA). Police told the court that questions and answers have to be done along with 11 lakh pages of data related to the riots from Khalid. Sources said that Khalid did not answer many police questions. Khalid was arrested by the police on Monday after questioning him. Police sources said that Khalid had an ‘intelligence’ office in Delhi’s Chand Bagh area where he had a late night meeting with co-accused Khalid Saifi, Tahir Hussain.