Venkaiah Naidu appeals to the youth to fight poverty, illiteracy, and social discrimination 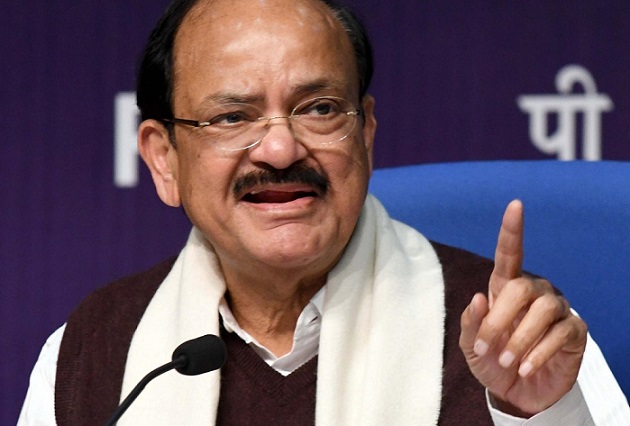 The Vice President made these remarks on the occasion of the 125th birth anniversary of Netaji Subhash Chandra Bose, which is being celebrated as ‘Parakram Divas’ across the country, addressing the officer trainees attending the Foundation Course of MCR HRD Institute, Hyderabad.

Noting that 65 percent of our population is under the age of 35, Naidu said that the youth should be a new India – a happy and prosperous India, where every citizen gets equal opportunities and where there is no discrimination of any kind and Should play a leading role in the creation of new India.

Describing ‘valor’ or courage as the most distinguishing attribute of Netaji’s personality, the Vice President praised the government’s decision to celebrate Netaji’s birthday as a ‘mighty day’ to encourage the people of the country.

Paying homage to Netaji Subhash Chandra Bose, he said that Netaji was a charismatic leader and one of the foremost figures of the freedom movement who believed that we should rise above caste, creed, religion and region for the progress of India and There is a need to understand ourselves as Indian first.

Noting the important role played by social reformers, including Subhash Chandra Bose and many freedom fighters, including unknown heroes from many fields, he said that many people were not aware of his greatness because the contribution he made to the history books was right Not presented with He insisted that ‘we should hold a ceremony on the lives of many of our great leaders. We need to come out of the colonial mindset.

Mr. Naidu said, “It is said that the increasing devotion of the Indian armed forces towards their motherland accelerated the process of moving from India to the British Empire.” Noting that various leaders in various ways in the freedom movement ran away. The Vice President said that ultimately all of them aimed to achieve India’s liberation from colonial rule.

Underlining that Netaji wanted to end the caste system in India, Mr. Naidu said that soldiers of all castes, creeds, and religions lived together in the 1940s, eating together in the same kitchen and only Used to fight only as Indians. He said that Netaji always insisted that the progress of India would be possible only through the upliftment of Dalits and marginal sections of society.

Recalling that Shri Bose had stood against every form of injustice since his school days, the Vice President mentioned the impact of the teachings of Ramakrishna Paramahamsa, Swami Vivekananda, and Sri Aurobindo on him. Shri Naidu said that this spirituality became the source of his inner strength.

Entering that Netaji’s democratic ideals were based on the principles of sacrifice and sacrifice, the Vice President said that Mr. Bose wanted citizens to imbibe the values ​​of discipline, responsibility, service and patriotism in order for democracy to flourish in independent India. .

Shri Naidu said that the true spirit of nationalism is related to working for the welfare of all citizens of the country.

The Vice President also said that Netaji Subhash Chandra Bose always took pride in India’s civilizational values ​​and rich cultural heritage, which he believed was the cornerstone of our national pride and collective confidence.

Shri Naidu said that Netaji wanted not only political bonding but also the equitable distribution of wealth, elimination of caste barriers, and social disparities.

Counting the qualities of Netaji’s inspirational leadership, the Vice President said that by his magical presence he could encourage soldiers who were ‘prisoners of war’ and transform them into ‘freedom fighters’ and that they would be in their homeland. And prepared for his beloved leader to fight till his last moments. Mr. Naidu said that Netaji and Azad Hind Foz had greatly encouraged the people as was evident from the popular support given to them by British authorities during the hearing of INA prisoners. He said that as a result, the British had to take a liberal attitude towards the INA jawans.

The Vice President underlined that Mr. Bose believed in giving equal rights to women in every sphere of life – whether social, economic, or political. He said that the progressiveness of Netaji’s ideas can only be gauged from the name of the women’s corps in the INA named Rani Jhansi Regiment. She appreciated the government’s decision to provide permanent commissions for women in the armed forces.

Describing Netaji’s belief that education is essential for character building and all-around development of human life, Shri Naidu has studied and taught us for meaningful education and to emerge as an education center and knowledge-based economy in India.