Home
My Voice
Why China wants to encroach the Pangong region!

Why China wants to encroach the Pangong region! 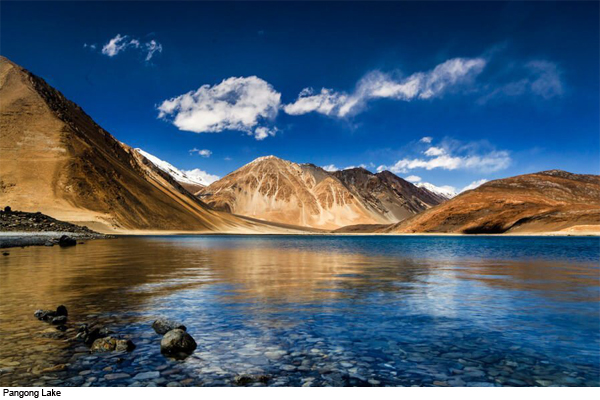 What is the reason that China has been continuously trying to encroach in the pangong of Ladakh. The People’s Liberation Army (PLA) is constantly trying to infiltrate this area. Since 1962, China has been eyeing this area. What is it in this area that the People’s Liberation Army of China wants to acquire this place at any cost. Let us know the economic and strategic importance of this region …

It is believed that the entire area is covered with precious metals deposits. According to many geological experts, the mountain located near Gogra Post is called the ‘Golden Mountain’. Satellite images have also confirmed a high gold deposit in the region.

According to local people and geologists, there is a huge gold reserves in this area. China is well aware of this. This is the reason why Chinese soldiers are constantly aggressive in this area.

Indian government has not been able to conduct a survey on gold mines in this area. The main reason for this is being attributed to China’s aggressive military patrolling in the Pangong region.

Pangong Tso Lake in eastern Ladakh has often been the most discussed during the Doklam standoff when a video of a scuffle between Indian and Chinese troops surfaced. In Ladakhi language, pangong means wide proximity, and Tso is a lake in Tibetan. Pangong Tso is a long, deep, panoramic (landlocked) lake located at an altitude of more than 14,000 feet in the Ladakh Himalayas.

The western end of Tso is located 54 km south-east of Leh. The 135 km long lake spans 604 sq km in the shape of a boomerang and is 6 km wide at its widest point. The saltwater lake freezes in winter and becomes ideal for ice skating and polo. Zorawar Singh, the great Dogra general of the 19th century, is said to have trained his soldiers and horses on the frozen Pangong Lake before invading Tibet.

Pangong Soo has 60 percent of its length in Tibet and 40 percent of it is in India. Being at such a height, this lake completely freezes in winter. During January to March the weather is very cold and snowfall also occurs. The temperature drops to -25 degrees, it is extremely cold and the entire area is covered with snow at this time.

Strategic importance of the lake
By itself, the lake has no strategic importance, but it falls in the path of Chushul. It is also important because China can use this route for aggression in Indian territory. Indian experts say that if there is a Chinese aggression, it will be from both the north and south sides of the lake.

During the 1962 war, this was where China started attacking India. The Indian Army fought valiantly at Rejang La, near the southeastern mountain of the Chushul Valley, where 13 Kumaon’s Ahir Company, led by Major Shaitan Singh, fought to their end.

To the north of the lake, there is the army’s Dhan Singh Thapa post named after Major Dhan Singh Thapa, who was awarded the Param Vir Chakra, the country’s highest gallantry award. Major Thapa and his platoon were repairing the Sirijap-1 chowki which was necessary to protect Chushul airspace.

Area connectivity
Over the years, the Chinese have built paved roads in their area of ​​Pangong Tso. This area shows how important this area is for China by the construction done by the Chinese military. LAC is located on the northern shore of the lake, which makes the area disputed.

In 1999, when the army was moved from the area to Kargil for Operation Vijay, China took advantage of this opportunity to build a road for about 5 km inside the Indian territory by the lake. On one of these roads, China is in such a position from where they can see the entire movement of Indian locations on the northern tip of Pangong Tso Lake.

Importance of fingers
The barren mountain on the northern side of the lake, called Chang Chenmo, is what the army calls ‘Fingers’. India claims that LAC is identical with Finger 8, but it only controls the physical area up to Finger 4. Chinese border checks are on Finger 8, while it is believed that LAC passes Finger 2.

About six years ago, the Chinese attempted a permanent construction at Finger 4, which was demolished after stiff objections by the Indians. The Chinese use light vehicles on the road to patrol Finger 2, which is a turning point for their vehicles.

If they are intercepted by the Indian patrol, and are asked to return, this creates an illusion, as vehicles cannot return from that place. The Chinese have now stopped the patrolling of Indian troops beyond Finger 2. It is a face-to-face situation that still remains.