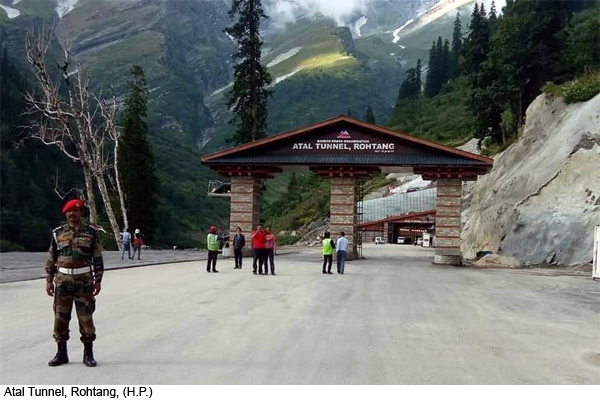 New Delhi: National Highways and Infrastructure Development Corporation Limited (NHIDCL) under the Ministry of Roads, Transport and Highways detailed Project Report (DPR) work of the world’s longest high-altitude Shinkun La Tunnel (13.5 km) and Union Territory of Ladakh and Himachal Lahaul-Spiti district of the state has started construction on the subways connected to it quickly. The Manali-Kargil highway will remain open throughout the year on completion of construction work of this tunnel.

The Government of India is giving priority to the construction of infrastructure in the border areas of Union Territory of Ladakh and Himachal Pradesh. In order to have a holistic view of improving road connectivity and its availability throughout the year, a team of senior officers of the department led by Mr. KK Pathak, Managing Director, NHIDCL, from Leh to North and South of Shinkun La Tunnel passing through North and Padum Traveled for two days, traveling approximately 12 hours daily by road to the regions.

During their 5-day visit to the Ladakh region, the team visited the north and south routes of the Shinkun La Tunnel and detailed review of the seismic investigations being carried out at the site by DPR consultants.

During the inspection of works, Pathak emphasized to expedite the project work in these areas so that the work can be concluded by 15 October 2020 before the start of the winter season because of heavy snowfall in the region after this period it occurs. Locals present at the site appreciated the efforts of NHIDCL to improve connectivity in remote and inaccessible areas of Ladakh and Lahaul and Spiti districts.