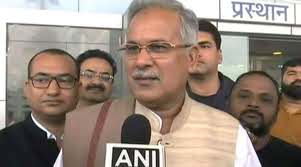 Raipur: Chief Minister Bhupesh Baghel, in a discussion with farmers at the paddy procurement center of village Gamharia in Jashupar district today, said that the fourth and final installment of Rajiv Gandhi Kisan Nyay Yojana will be paid in the current financial year only in March. He told the farmers that the first installment of additional amount under the Rajiv Kisan Nyaya Yojana for the paddy being purchased in the current Kharif season will be given in the coming May.

Baghel arrived at the paddy procurement center at village Gamhariya in the district on the second day of his stay in Jashpur today. He discussed with 15 farmers from 10 villages and inquired about the arrangement and payment of paddy purchase. The farmers informed the Chief Minister that the system of paddy procurement is correct and that the paddy sold by them at Gamhariya Paddy Procurement Center has been paid two days ago. Shri Khairuddin, a farmer of village Sitaangratoli, said that he has received payment of Rs. 1 lakh 20 thousand for the paddy sold during the current Kharif season two-three days ago. Officials of the Gamhariya Paddy Procurement Center said that this year 974 quintals of paddy have been purchased from 21 farmers in the first four days of paddy purchase.

Farmers of Kinkela, Putrichaura, Lukikona, Sarudih, Pathratoli, Saitangratoli, Podi, Galonda, Paiku and Tikaitganj villages of Jashpur district present in the Paddy Procurement Center Gamharia to the Chief Minister Mr. Baghel told that the amount given to them under the Rajiv Kisan Nyay Yojana Three installments have been received. On this, the Chief Minister said that its fourth and final installment will be paid in the current financial year itself in March. The Chief Minister told the farmers that the first installment of additional amount under the Rajiv Kisan Nyay Yojana will be given in May for the paddy being purchased in the current Kharif season.

The Chief Minister met the farmers warmly at the Gamhariya Paddy Procurement Center located in the premises of the Agricultural Produce Market Committee office of Jashpur. He talked to the farmers about farming and farming as well as their families. Baghel also took a group photo with him at the request of the farmers. Food Minister Amarjeet Bhagat, Parliamentary Secretary Chintamani Maharaj, Chhattisgarh Mineral Development Corporation Chairman Girish Dewangan, Chief Minister’s Advisor Vinod Verma, MLA Vinay Bhagat, Sarguja Division Commissioner Geneviva Kindo and Jashpur Collector Mahadev Kavre were also present during the period.