Home
States
A grand festival in Ayodhya, Shri Ram city will be illuminated with 5.5 million lamps

A grand festival in Ayodhya, Shri Ram city will be illuminated with 5.5 million lamps 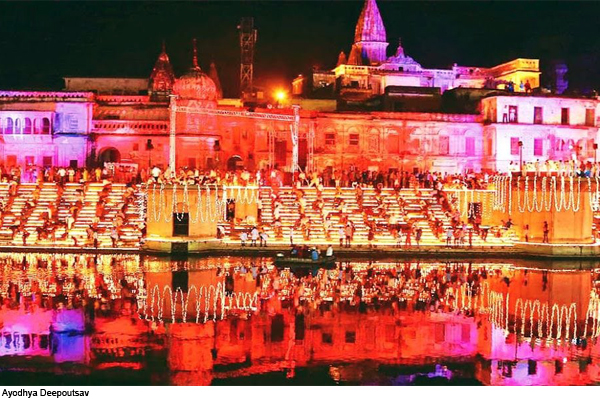 Lucknow: After 492 years in Ayodhya, the dream of grand festival on the birthplace of Ram is going to come true. Great preparations have been made for this three-day event. Under the leadership of CM Yogi, Deepotsav will be celebrated on the occasion of Chhoti Diwali in Ram’s city of Ayodhya. During this, a new Guinness Book of World Record will be set by burning more than 5 lakh 50 thousand lamps on the Ghats of Ram’s Paadi. Uttar Pradesh Governor Anandiben Patel and Chief Minister Yogi Adityanath will perform special puja by lighting a lamp in front of the temple of Ramlala, enshrined in Ramjanmabhoomi. Ayodhya has been fully decorated since Thursday evening, a day before the Deepotsav.

Preparations for Deepotsav in Ayodhya have been completed for several days. The streets and roads of Ram’s Paidi to Dharmanagri have been brightened. The coast of Saryu is also shining with light. Chief Minister Yogi Adityanath, along with Chief Minister Yogi Adityanath to unveil the Deepotsav-2020, will walk from Lucknow to Faizabad Helipad at 3.50 pm. He will reach Ramjanmabhoomi at 3:10 pm by road and will proceed to Ramkatha Park after worship. At 3.30 pm, he will receive the forms of Prabhu Ram and bring him to the stage of Ramkatha Park.

Governor and CM will coronation
The Shri Ram coronation ceremony will start from 3.50 pm and will last till 5.30 pm. During this time, the Chief Minister and the Governor will govern Prabhu. Along with this, he will unveil a special cover released by the Department of Posts and address the function. Then depart the Ramkatha Park for Swargaghat Ghat and take part in Maa Sarayu’s Aarti. After concluding the program here at 6 pm, the Chief Minister and the Governor will visit Ram Ki Paidi for the Deepotsav and reach the stage to start the Deepotsav at 6.30 pm. From here, Governor Mrs. Patel will leave for Lucknow. Whereas at 7.20 pm, the Chief Minister will leave Ramapadi and then come to Ramkatha Park to observe the staging of Ramlila. At eight o’clock in the night, he will leave for the circuit house and take a night’s rest. The program ahead of this will be as per the convenience of the Chief Minister.

Chief Minister will visit Hanumangarhi in Hanumangarhi on Sunday morning. Hanuman’s birth anniversary will be celebrated on Saturday midnight on the festival of Kartik Krishna Chaturdashi. The Chief Minister has been coming here for the Jubilee celebrations held every year. After this, the Chief Minister will also attend the court of Ramlala and will again pay courtesy to the saint-mahants and public representatives at Karsevakapuram and greet the festival. After this, he will leave for Gorakhpur.

Rambhaktas were convinced of the art of UP artists
In a grand event of Divya Deepotsav, the Tulsi Katha Raghunath exhibition by the Information and Public Relations Department Uttar Pradesh is held in the Tulsi garden of the state in Ayodhya. All the pasts of Lord Rama are described in the exhibition through paintings. Thousands of people are flocking to the pandal everyday to see this. Outstanding painting exhibitions by state artists include Rajsuya Yajna, Ram Janmotsav, Ram Vivah, Ram Van Gaman, Kevat Case, Paduka by Bharata, Sitaharan, Shabri Case, Lanka Dahan, Sanjeevani Booti, ​​Ravana Slaughter, Ram coronation ceremony. Adi paintings are heart touching, which take visitors to the pandal in Tretayuga. The Tulsi garden has a depiction of Ram Katha on one side. At the same time, the Ramayana is being broadcast continuously through large LEDs TV. The exhibition will start from 11 November and will run till 30 November.