Bihar Election Result: Congress activated in Bihar amidst panic of formation of government, churning in Patna 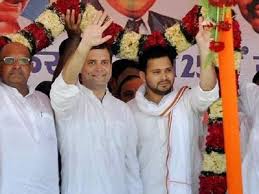 The grand alliance has claimed an absolute majority in most exit poll surveys. After this, Congress President Sonia Gandhi appointed Congress General Secretaries Randeep Singh Surjewala and Avinash Pandey as Observers of Bihar and both leaders are reaching Patna on Sunday evening.

These two leaders of the Congress will have the responsibility of coordination between the central leadership and the alliance partners on the developments following the results of the assembly elections in the state.

Meanwhile, a meeting of the coordination committee was held in the Congress office in Patna, in which all the secretaries, local incharge and officials of the Bihar unit of the party were involved. An internal review meeting was held at the party. Discussions were also held on what the future strategy would be.

Meanwhile, senior Congress leader and Rajasthan Health Minister Dr. Raghu Sharma has reached Patna. Raghu Sharma has been asked by the party high command to be present in Bihar in view of the possible post-election scenario in that state.

He said that our observers were here during the elections and that is why they are aware of the situation here. Generally, observers go to states where elections are held, so it is a regular process.

Madan Mohan Jha said that we have no doubt that our MLAs will move to another camp even before the results come to Patna. All are with the party who have contested on the party ticket.

Elections were held in 3 phases in Bihar. According to the estimates of India-Today-Axis My India exit poll on Saturday, the grand alliance is getting an absolute majority. According to exit poll survey, the alliance led by Tejashwi Yadav is seen getting 139 to 161 seats in the 243-member assembly.

Whereas, the ruling NDA led by Nitish Kumar may have to settle for only 69 to 91 seats. If we talk about vote share, then the grand alliance is expected to get 44 percent and NDA 39 percent.

On the basis of the survey, according to the parties, the Rashtriya Janata Dal (RJD) seems to be emerging as the largest party with 94 to 106 seats. Among its allies in the alliance, the Congress is expected to get 29 to 35 seats, CPI (ML) 12-16 and CPI and CPM two each. Similarly, JDU is expected to get 26 to 34 seats in NDA. BJP can get 38-50 seats more than JDU in NDA.