Home
Entertainment
Day 2 of Bigg Boss 15: Pratik Sahajpal broke the property of the house in the midst of a fight with Jaybhanushali

Day 2 of Bigg Boss 15: Pratik Sahajpal broke the property of the house in the midst of a fight with Jaybhanushali 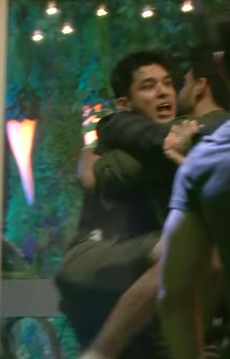 ‘Bigg Boss 15’ as usual is grabbing attention with its high drama and fights. Pratik Sehajpal is in the news because of his confrontation with other contestants.

In a recent episode during a task, Jay Bhanushali and Pratik got into a verbal spat, catching everyone’s attention. As the bickering got worse, Both of them pushed each other, breaking the glass divider. They nearly came to blows, with everyone stopping them just in the nick of time ! Pratik showed his furious side by banging his chest after Jay mocked him,”Tu Khatam Ho Gaya”.

Earlier, Partik had a fight with Jay and Umar regarding the “Bigg Boss” house rules. While Jay warned Pratik to watch his mouth, the latter hit back by bringing up orders from Bigg Boss. While Umar and Karan sided with Jay, Nishant took Pratik’s side.

Another big fight that recently took place in “Bigg Boss” house was of Afsana and Vidhi right after ‘Bigg Boss’ commanded everyone to turn in their belongings except for the essentials. As Vidhi hurried everyone to follow the order, Afsana suddenly lost her nerve and started screaming at her. Equally strong-willed herself, Vidhi also lashed out at Afsana, threatening to hit her to quieten her down.

Shamita was seen teasing Pratik with the name of Meisha and Akasa. However, Pratik expressed that he has nothing for them.

This year the makers of the show have introduced ‘Jungle theme’. The tagline of the show is ‘Sankat in Jungle, Phailaayega Dangal Pe Dangal’. The house has been created by art director Omung Kumar and production designer Vanita Omung Kumar. The house is studded with lush green trees, beautiful wall hangings, a swing hanging from a tree and a ‘khufiya darwaza’ . There’s also a pond adorned with pink lotuses and a tree of temptation called the VishwasunTREE.