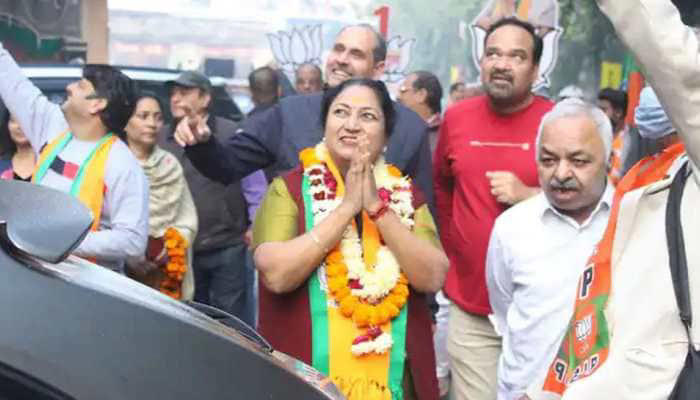 New Delhi: The BJP on Tuesday decided to field its Shalimar Bagh corporator Rekha Gupta as Delhi’s mayoral candidate to challenge AAP’s Shaili Oberoi in the January 6 elections. Delhi BJP media cell chief Harish Khurana said the BJP has nominated Kamal Bagri as deputy mayor candidate as well as Kamaljit Sehrawat, Gajendra Daral and Pankaj Luthra for the posts of standing committee members. Later all the candidates of the party will file their nominations.

The AAP has a clear majority in the 250-member House of the Municipal Corporation of Delhi (MCD). Some party leaders claimed that there could be a tough fight for the posts of mayor and deputy mayor as the anti-defection law does not apply to the MCD and floor crossing could be possible.

The AAP ended the BJP’s 15-year rule in the MCD by winning 134 out of 250 wards in the municipal polls earlier this month. The BJP was successful in winning 104 wards. Later Mundka corporator Gajendra Daral also joined BJP. While the Delhi BJP is unlikely to win the post of mayor and deputy mayor, it will try to win three posts of crucial standing committee members of the MCD.

The mayor is elected through a secret ballot and councilors are free to vote for any candidate as the anti-defection law does not apply. The electorate for the election of the mayor includes 250 elected councilors from Delhi, seven Lok Sabha and three Rajya Sabha MPs and 15 MLAs of the Vidhan Sabha.

The Delhi Assembly Speaker has nominated 13 AAP MLAs and one BJP MLA to the MCD. The total votes for the mayoral election are 274. The numbers game is in favor of AAP, which has 150 votes against BJP’s 113.

The Congress has nine corporators in the MCD House while two others are independents. Elections for the mayor, deputy mayor and members of the standing committee will be held on January 6. The Standing Committee of the MCD has 18 members, of whom 12 are elected from the Zone and six from the House.