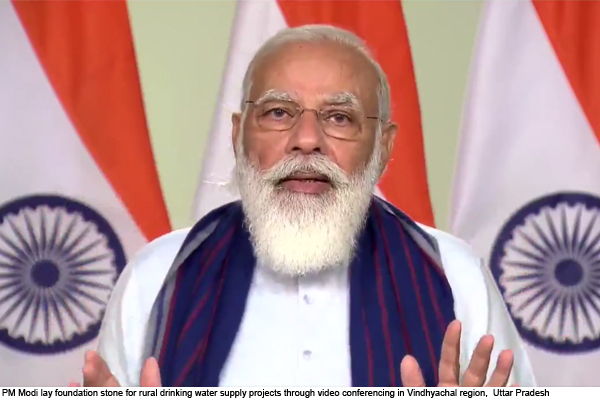 The projects for which the Prime Minister laid the foundation stone today will provide water-tap connections to all the houses in 2995 villages and will benefit about 42 lakh population of the districts. Rural Water and Sanitation Committees / Water Committees have been formed in all these villages, which will take care of its operation and maintenance. The total estimated cost of these projects is Rs 5,555.38 crore. The projects are planned to be completed in 24 months.

In his address on the occasion, the Prime Minister said that in the last one and a half years after the launch of the Water Life Mission, more than two crore 60 lakh families have been provided drinking water connections, including several lakh families of Uttar Pradesh. He said that the life of our mothers and sisters has become easier because of the water life mission because they are getting water easily in their homes. He said that one of the biggest advantages of this is that due to dirty water, waterborne diseases like cholera, typhoid, insiphilitis in poor families have come down drastically. The Prime Minister said that despite having abundant resources, Vindhyachal and Bundelkhand regions remain scarce areas. He said that despite having many rivers, these areas are considered to be waterlogged and drought prone areas. He said that for this reason many residents here have to leave the area and move elsewhere. He said that now these projects will solve the issues like water crisis and irrigation, which is an indicator of rapid development.

The Prime Minister said that when thousands of villages of Vindhyachal reach drinking water through pipes, the health of the children of the region will improve and their physical and mental development will improve. He said that when someone gets the freedom to take decisions and work on those decisions for the development of your village, it increases the confidence of everyone in the villages. He said that self-reliant India gets power from self-reliant villages.

The Prime Minister praised the Government of Uttar Pradesh for its effective governance in times of pandemics and maintaining the momentum of reforms. Shri Modi also gave information about the development work done in this area. He pointed to the provisions for continuous additional income to farmers by installing LPG gas cylinders, power supply, solar plant at Mirzapur, completion of irrigation projects and solar projects on wastelands.

Referring to the ownership plan, the Prime Minister said that the owners of the land have been granted verified ownership leases of residential and cultivable land, which has brought stability and certainty in the minds of the people. This has curbed the tendency of the poorer sections of the society to illegally encroach on the property and improve the chances of taking loans in exchange for this property.

Talking about the efforts being made to upgrade the tribal population of the region, Shri Modi said that under some special projects these schemes are also being taken to tribal areas. Hundreds of monolithic model schools have been opened in all such areas including Uttar Pradesh. Our aim is to provide this facility in every tribal dominated block. He said that forest produce based projects have also been implemented. A district level mineral fund has also been established. So that there is no shortage of funds in tribal areas. The idea behind this plan is to invest a part of the resources from these areas locally. 800 crore has been collected under this fund in Uttar Pradesh and more than 6000 projects have been approved.

The Prime Minister appealed to the people to be conscious of Corona as its threat still looms. He asked the people to take the prescribed precautions with all sincerity.