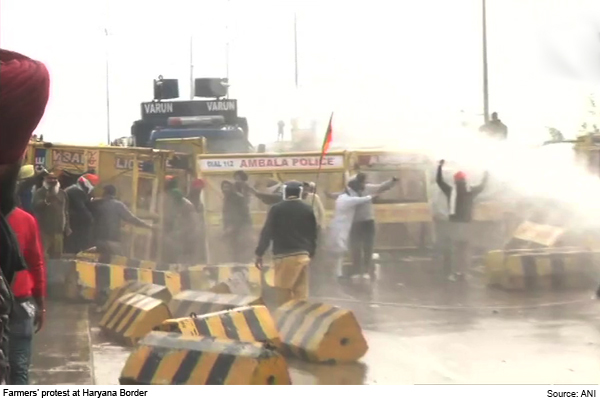 New Delhi: There is going to be a huge demonstration of farmers in the capital Delhi today. Farmers of Haryana started their ‘Delhi Chalo’ march from Fatehabad district on Thursday morning. Water canon, affected by police blockades and freezing cold, thousands of farmers in Punjab and Haryana are marching towards the national capital in tractors, trolleys and other vehicles to protest the agricultural laws implemented by the Center. Police have put up barricades to stop the movement of farmers along the Singhu border and are using drones.

According to the information, thousands of farmers will perform in Delhi today under the banner of Bharatiya Kisan Union. In view of this, Delhi Police has tightened security along the border of Haryana in view of the farmers’ agitation. Along with this, there is talk of taking strict action against the agitators. At the same time, services on the six lines of the Delhi Metro will be affected due to the farmer movement.

Let us tell you that various farmer organizations had announced a sit-in at Jantar Mantar. According to the information, the leaders and workers of the Indian Farmers Organization had gathered on the Singhu border on Wednesday. Farmers in the number of 500 to 600 in about 50 tractor trolley from Punjab were preparing to enter Delhi. But he could not come to Delhi due to the police and reserve force of Outer North district being stationed on the Singhu border.

The All India Kisan Sangharsh Coordination Committee; The farmers are expected to reach Delhi on Thursday through five highways connecting the city on the call ‘Delhi Chalo’ by various factions of the Rashtriya Kisan Mahasangh and Bhartiya Kisan Union. Under this nationwide call, Haryana government employees have also announced to go on strike today.

Delhi Police said on Wednesday that it has rejected requests received from various farmer organizations to protest in the national capital. Deputy Commissioner of Police (New Delhi) tweeted, “Cooperate with Delhi Police to ensure any congestion in the corono virus in Delhi”. , Will not cross borders to enter Gurgaon or other NCR cities. Trains from NCR cities also will not enter Delhi during that time and will run within the boundaries of those towns.

A Delhi Police spokesperson said that stern action will be taken against the protesters coming to the capital. It is being told that a large batch of farmers are secretly in a bid to enter the capital. Along with this, police of other districts have also been alerted.