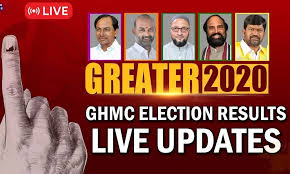 Hyderabad GHMC Election Results 2020 Live Updates: As counting begins, initial trends suggest that the Bharatiya Janata Party (BJP) is leading for absolute majority and TRS in trailing behind. The initial results is expected to come around 11am. With Greater Hyderabad comprising 25 assembly constituencies and four Lok Sabha seats, the civic elections have become a prestige battle between the Telangana Rashtra Samithi (TRS) and the BJP. The TRS, AIMIM, BJP, Congress and TDP have sent important leaders as counting agents.

BJP, which has only two MLAs in the Telangana assembly at present, is hoping GHMC will give it a launch pad needed to become a serious contender, not only in Telangana but in other southern states as well. On the other hand, the TRS is confident to get enough seats to have its own mayor but fears that there could be a fall in the total number of seats it would win. Some reports suggest that the BJP has given a tough fight and the TRS may end up winning 70 divisions or so. The party hopes that possibility of the AIMIM losing a couple of seats as compared to last time may boost its chances.