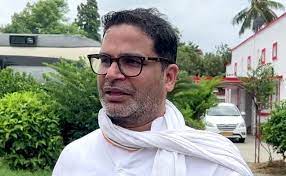 Political strategist-turned-activist Prashant Kishor on Sunday lamented the lack of development in Bihar. He alleged that Prime Minister Narendra Modi and the Bharatiya Janata Party left the state in the hands of Nitish Kumar and Lalu Yadav, stalling the state’s progress.

Prashant Kishore targeted Lalu Prasad Yadav for not doing necessary work for the development of Bihar. He also attacked Chief Minister Nitish Kumar for “abandoning the people of Bihar” and “just trying to retain the Chief Minister’s seat”.

Prashant Kishor, who set out on a 3,500 km long padayatra, said, “Whether we accept it as ignorance or cleverness of Lalu ji, he gave voice to the society of Bihar but did not give them education, did not give them the land reforms that they needed. The people were behind, they stayed behind.

In a video of his address, Prashant Kishor is seen launching a scathing attack on the RJD chief. “These (backward) people can raise slogans in support of Lalu Yadav but their children cannot be equal to Lalu ji,” he said.

Kishore also targeted Narendra Modi and BJP in his speech. He alleged that PM Modi and the BJP had also left Bihar in the hands of Nitish Kumar and Lalu Yadav instead of taking responsibility for the development of the state.

“This state bet on Nitish Kumar and Nitish Kumar showed his work for 5-7 years, and after 2005 the state saw some growth. But even after losing the 2014 Lok Sabha elections, Nitish Kumar left the state ” And just sought to remain in power,” Prashant Kishor said.

He further said, “Then we saw Modi ji’s tenure. After coming to power in the 2014 Lok Sabha elections, the BJP fought the 2015 Bihar elections with full vigor. But when the people of Bihar defeated the BJP in the elections, the BJP also left Bihar. In the hands of Nitish Kumar and Lalu Yadav.”