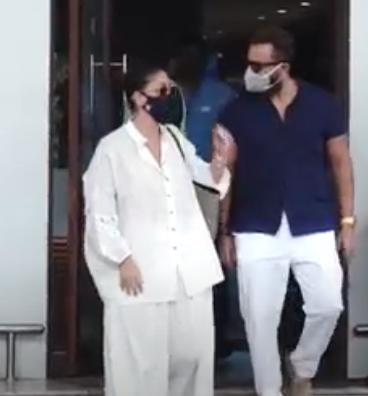 Actress Kareena Kapoor Khan and Saif Ali Khan who were on a vacation with their kids Taimur and Jeh returned to Mumbai on Sunday.

For their airport look Kareena opted for white co-ord set while Saif wore a blue shirt with white pants. Taimur was seen dressed in green t-shirt and orange pants and Jeh looked super cute in onesie.

Kareena celebrated Saif birthday and Jeh’s six-month birthday celebration on their vacation. Kareen recently shared a much-loved picture of little Jeh, who was most recently the subject of an unsavory troll attack, with her elder son, Taimur, and her actor-husband Saif Ali Khan.

Saif and Kareena, who are fondly called Saifeena by their fans, had tied the knot in December 2012. Jeh was born on February 21 this year . Kareena and Saif’s elder son Taimur was born in 2016.

Kareena Kapoor Khan is all set to turn producer for the very first time in collaboration with Ekta Kapoor’s Balaji Telefilms. The untitled film will be directed by Hansal Mehta. On the acting front, Kareena upcoming film is “Laal Singh Chaddha” in the lead role opposite Aamir Khan.