Home
States
Kedarnath doors closed, Now you can visit the lord at Ukhimath

Kedarnath doors closed, Now you can visit the lord at Ukhimath 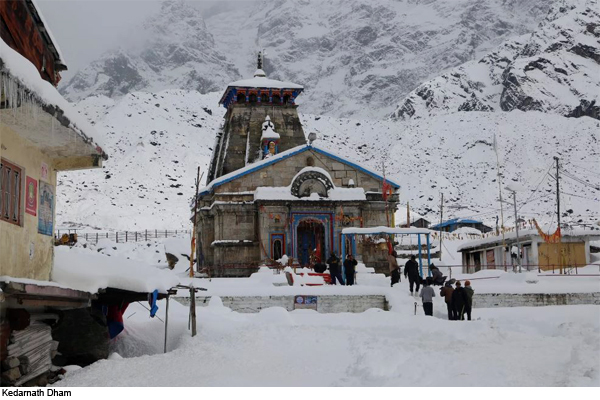 New Delhi: The valleys of Kedarnath Dham, one of the two Jyotirlingas, have been closed with legal legislation at 8.30 am for the winter, amid snowfall. Uttar Pradesh Chief Minister Yogi Adityanath and Uttarakhand Chief Minister Trivendra Singh Rawat, Cabinet Minister Madan Kaushik, Minister of State Dhan Singh Rawat etc. were present on the occasion.

According to the news agency ANI, CM Trivendra Singh Rawat and UP CM Yogi Adityanath took part in the ceremony of closing the doors of the Kedarnath temple amidst heavy snowfall. Scenes of UP CM and CM of Uttarakhand departing from the snow-covered Kedarnath temple complex after the closing day celebrations.

Special worship began at Kedarnath from 2 am on the holy festival of Bhaiyuduj. Baba Kedar’s Swayambhu Jyotirlinga was consecrated by Chief Priest Shiv Shankar Linga and covered with bhasma.

At 4 o’clock in the morning, Bhogamurthy was kept in the temple premises for the devotees, while seated in the moving festival Vigraha Doli. Along with completing other religious ceremonies, the doors of the sanctum sanctorum of the temple were closed at 5.30 am.