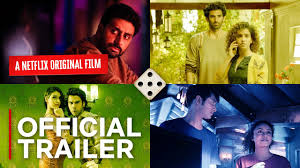 There is a lot of riveting content to release this Diwali season. With cinemas reopening under the central government’s Unlock 4 plan, audience can once again enjoy the traditional movie experience. They can also tune into their favourite streaming platforms to catch some of the exciting shows and films releasing this week.

Aashram: Chapter 2
11 November on MX Player
After the premiere of the first season of Aashram in August, filmmaker Prakash Jha will return for the show’s sophomore season. Titled Aashram: Chapter 2- The Dark Side, it stars Bobby Deol as a self-styled godman Baba Nirala.

Soorarai Pottru
12 November on Amazon Prime Video
Starring Suriya, the film is inspired by the life of Captain GR Gopinath, a retired Army captain, who founded the low-cost airline Air Deccan. Helmed by director Sudha Kongara, known for films like Saala Khadoos (2016) and Guru (2017), the film will see Aparna Balamurali as the female lead.\

Mum Bhai
12 November on ZEE5
The ZEE5 Original is set in the 1980s and is centred around the cat-and-mouse chase between the underworld and Mumbai police at the time. Angad Bedi and Sikander Kher are childhood friends who grow up to represent the opposite sides of the law.

Sir
13 November in cinemas
The Mumbai-set film probes the relationship between the scion of a real-estate family Ashwin (Vivek Gomber) and a live-in domestic help Ratna (Tillotama Shome), who cooks and cleans for him. Directed by Rohena Gera, the romantic drama has received acclaim in 45 film festivals. It is among the top 5 highest-grossing Indian films ever released theatrically in France.

Jingle Jangle: A Christmas Journey
13 November on Netflix
In Cobbletown lives legendary toymaker Jeronicus Jangle (Forest Whitaker), whose fanciful inventions burst with whimsy and wonder. But when his trusted apprentice (Keegan-Michael Key) steals his most prized creation, it is up to his equally bright and inventive granddaughter (Madalen Mills) and a long-forgotten invention to heal old wounds. The film features original songs by John Legend, Philip Lawrence, Davy Nathan, and ‘This Day’ performed by Usher and Kiana Lede.

The Life Ahead
13 November on Netflix
Sophia Loren plays Madame Rosa, a Holocaust survivor who takes care of children of sex workers. She eventually forms a deep bond with Momo, a 12-year-old Senegalese immigrant (Ibrahima Gueye). The Italian drama, directed by Edoardo Ponti, is an adaptation of 1975 French novel The Life Before Us.

Inside Pixar: Behind the Doors of Imagination
13 November on Disney+ Hotstar
The docu-series chronicles personal and cinematic stories that provide an inside look into the people, artistry, and culture of Pixar Animation Studios.

Becoming You
13 November on Apple TV+
What’s it about: Olivia Colman turns narrator for Becoming You, a global child development series that explores how the first 2,000 days on earth shape the rest of our lives. Told through the eyes of over 100 children across the world, from Nepal to Japan and Borneo, each episode offers a look at how children learn to think, speak, and move from their birth till they are five years old. It underscores how different our journeys can be but ultimately tells the story of our shared humanity and community when it comes to raising children.

Doug Unplugs
13 November on Apple TV+
Hailing from DreamWorks Animation, and based on Dan Yaccarino’s book series of the same name, Doug Unplugs follows a young robot named Doug who senses there is more to life than just the facts. While other robots

Unhinged
13 November on ZeePlex
Starring Russell Crowe in the lead, Unhinged is a story about a single mother who is stalked and tormented by a stranger following a road rage confrontation at a red light. The film has been directed by Derrick Borte and also stars Jimmi Simpson, Gabriel Bateman and Caren Pistorius.

Mookuthi Amman
14 November on Disney+ Hotstar
Mookuthi Amman offers an interesting mix of social drama and comedy by subtly touching upon the topics of regional politics and taking potshots at religious leaders. Directed by RJ Balaji and NJ Saravanan, Nayanthara plays the Goddesses Amman in the film and Balaji plays a reporter in a Kanyakumari-based local channel.

Suraj Pe Mangal Bhari
15 November in cinemas
What’s it about: Set in the ’90s, Suraj Pe Mangal Bhari is billed as an unlikely comedy about a wedding detective on a hunt which turns into a chase game. The principal cast includes Manoj Bajpayee, Diljit Dosanjh and Fatima Sana Shaikh.

The Crown Season 4
15 November on Netflix
As the ’70s approach, Queen Elizabeth (Olivia Colman) and her family are concerned with safeguarding the line of succession by finding a bride for Prince Charles (Josh O’Connor). In the midst is the divisive politics of Prime Minister Margaret Thatcher (Gillian Anderson), leading to a series of conflicts. Emma Corrin will be seen as Princess Diana, whose romance with Charles provides a much-needed fairytale to unite the British public.

Based on author Philip Pullman’s beloved trilogy, His Dark Materials follows Lyra, a brave young woman from another world. Lyra’s quest to find her kidnapped friend leads her to uncover a sinister plot of a secret organisation, encounter extraordinary beings, and protect dangerous secrets. The second season dives into the second book in Pullman’s trilogy, Subtle Knife.