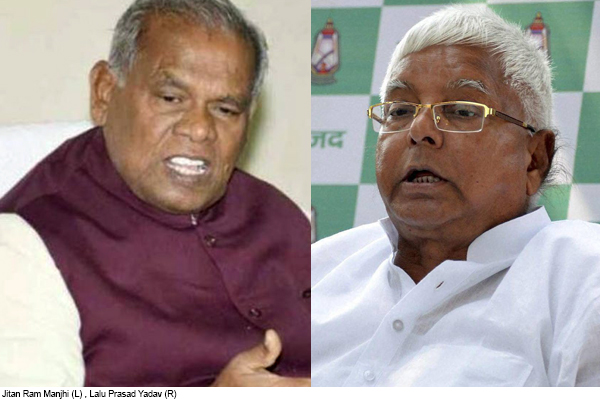 Patna: Former Bihar Chief Minister and National President of Hindustani Awam Morcha Jitan Ram Manjhi has alleged that Rashtriya Janata Dal (RJD) supremo Lalu Prasad Yadav had approached him several times from jail to topple the Nitish Kumar government. Manjhi has revealed that he received a call on Tuesday night, in which the caller claimed that Lalu wanted to talk to him, but he refused to talk to them.

Jitan Ram Manjhi said, “I got a call from Lalu Prasad at 11 pm when he tried to talk to me, but I did not talk to him. The allegations made by Sushil Kumar Modi and BJP MLA Lalan Paswan against Lalu Prasad are 200 per cent true, “said Manjhi, president of Hindustani Awam Morcha.” Lalu is doing politics sitting inside a jail in Ranchi. This is a wrong example. I demand an inquiry into the matter. Lalu also contacted my party MLAs after the election and lured them to the post of minister. “

A day after the sensational revelations of Jitan Ram Manjhi, BJP leader Sushil Kumar Modi released an audio tape in which Lalu Prasad approached BJP MLA Lalan Paswan and asked him to vote for the Grand Alliance or win the Nitish Kumar government. Was absent from the election of.

The BJP has demanded that Lalu Prasad should be immediately shifted from Ranchi to Tihar Jail and a CBI inquiry should be launched on this audio conversation between Lalu and the BJP MLA.