My Father is a warrior; needs four more years as president: Ivanka 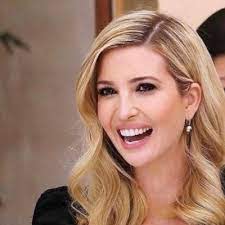 Addressing a large crowd Saturday in Ohio, which is a battleground state for the Nov. 3 primary, Ivanka said Trump has led the United States in the right direction.

The president of the United States, Donald Trump, is a warrior and needs four more years in the White House, his daughter Ivanka Trump has said, assuring that he gave more than his commitment to his compatriots.

“Now more than ever, America needs four more years as a warrior in the White House. My father fights very hard every day for each one of us. Now we have the opportunity to fight for him and fight for the future of this country, ”he said. Trump, a Republican, is being challenged by his Democratic rival Joe Biden in the November 3 election.

Ivanka, the eldest daughter of President Trump, is also a senior senior adviser to the White House and has played a significant role on issues such as women, children, youth, jobs and unemployment. “With your help, your voice and your vote on November 3, we will win another historic victory and make America greater than ever,” she said.

Senator Robert Portman, who introduced Ivanka, described her as a superstar daughter of President Trump.

“When I got to Washington, I quickly learned why the political establishment worked so hard to keep our president out of office. In the swamp, it is easy for politicians to survive, if they silence their convictions and if they skip the tough struggles, ”she said.

“I was amazed to see how many of these big challenges were left unresolved so they could campaign on the same issue in the next election. Really shocking greetings. It happens all the time, ”he said.

Ivanka, along with her brother Donald Trump Jr and Eric Trump and her sister Tiffney, has been aggressively campaigning in battle states seeking votes for their father. Like father and brother Donald Trump Jr, Ivanka has similar talking points, but connects with the audience very quickly, with short sentences and interactive comments.

On Saturday, she asked for little kids in Halloween costumes. The moment she identified two children in the front rows dressed in Halloween costumes, she asked them to join her on stage. She chatted with the two for a few minutes and praised her dress. Later in her speech, she told the audience that she celebrated her birthday a day earlier on the road. The crowd immediately erupted into the song “Happy Birthday to You” which lasted about a minute.

In her speech that lasted about 35 minutes, she recognized several local entrepreneurs who had brought manufacturing to Ohio and spent the same amount of time interacting with the several hundred people who had come to hear her speech.

“He’s sure there are some former Democrats here. I know them all over the country. Raise your hand … Look at that. The tent is growing, ”he said. “The Democratic Party has a platform that sets out a plan to transform the United States into a socialist country,” she said.