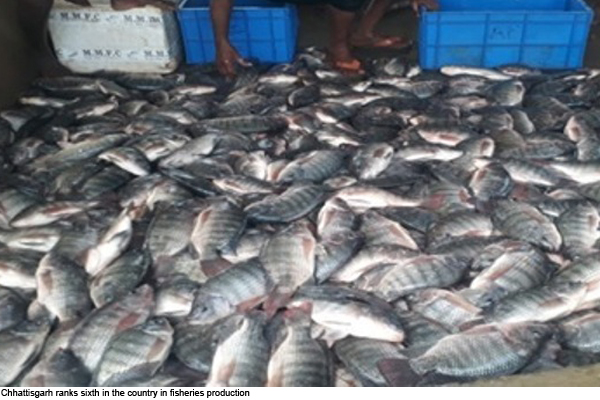 Raipur: As a result of the encouragement given by state government under the leadership of Chief Minister Shri Bhupesh Baghel to fisheries and pisciculture, a notable increase of 13 percent in fish seed production and 9 percent in fish production has been recorded in Chhattisgarh during the last two years. A grand honour for the state in the field of fisheries and pisciculture as two fishermen of the state will be awarded and honoured at the national level for their remarkable contribution in the field of fisheries. The award will be presented at a ceremony held at AP Symposium Hall, Pusa Campus, New Delhi, by the Government of India, to mark the World Fisheries Day on 21st November.

Within the ceremony, the Masors MM Fish Seed Cultivation Private Limited, Mana, Raipur will be honoured with a cash prize of two lakh rupees along with a certificate of appreciation on the account of Best Fisheries enterprises. Also, Messrs. M.I.K the company, Sihawa, District Dhamtari will receive a cash prize of Rs one lakh along with a certificate of appreciation, under the Best Proprietary Firm Cadre.

Chief Minister Mr. Bhupesh Baghel and Agriculture and Water Resources Minister Mr. Ravindra Chaubey have conveyed their regards and congratulated the fishermen and the impeccable institutions that have made the state proud.

Agriculture Minister Mr.Ravindra Chaubey stated that the farmers practising fisheries or pisciculture in the state are achieving constant success by adopting the latest technology. The state is self-sufficient in the field of fish seed production. Since the past two years, the fish seed production has increased by 13% in the state, with 251 crores standard fry to 267 crores standard fry. The state of Chhattisgarh has been ranked sixth in the field of ​​fish seed production in the nation. He further quoted that, “It is a matter of immense proud for the state, that along with the supply of essential fish seeds in the state’s fisheries, the state is also exporting fish seeds by the private sector to Madhya Pradesh, Odisha, Maharashtra, Andhra Pradesh and Bihar”.

Pangasius species are being cultured by pisciculturists of the state, with the construction of 1000 ponds on their land within the past two years. Progressive fish farmers of the state and farmers of the district Kanker are achieving fish production up to 60-70 metric tons per hectare by constructing ponds in a group, with the aid of latest technology and culturing the Pangasius fish species. The people of the state are getting healthy Protein-rich diet with its availability.

Culturing of fast-growing fish “Tilapia” has aided in increasing the fish production of the state. In the private sector. A Hatchery has been established in Raipur for the Tilapia seed production. The state has a consumption demand of approximately 20 tonnes of tilapia per day. The tilapia fishes are being exported to other states like Kerala, Uttar Pradesh and Madhya Pradesh. 3 crores of tilapia fish seed have been produced in the private sector, within the state this year.

The Cage culture technique ensures 100% attainment of fish in medium and large reservoirs of the state. Cages with the dimension of 6x4x4 meter are being installed in the reservoirs, with fast-growing fish such as ‘Pangasius’ and ‘Telepia’. Approximately, 3000–5000 kgs of fishes are produced per cage. Up till now, 1400 cages have been installed in 11 districts of the state.

The project of installation of 1000 cages has been sanctioned at Hasdeo Bango, Korba, the largest reservoir in the state. After installing these, one unit each of 05-05 cages per beneficiary will be allocated for fisheries. 40 to 60 percent grant is being provided by the government to the local scheduled castes fishermen. A higher priority will be provided to the people of the Duban region.

The latest technologies implemented in the field of fisheries in the state, such as integrated fisheries, intensive fisheries, pangasius farming and culturing, recirculatory aquaculture systems (RAS), have born fruitful results for the state. The fish production of the state is continuously increasing with the constant purification of water in the lesser area and less water area and adopting fisheries. Fisheries officers and progressive fish farmers from other states are getting inspired by studying and testing new technologies used in the state of Chhattisgarh, especially RAS.

The state government has approved a scheme to encourage the fishermen of the state to install bioflack technology to increase production by rearing fishes, using balanced food by installing small tanks in the area, with the instruments of the latest technology. A provision has been made to provide 40 per cent of financial assistance to the people of the state on the establishment of a unit costing Rs 7.50 lakh.