Home
States
Don’t burst the firecrackers instead eat it, a Chocolatier found a unique way

Don’t burst the firecrackers instead eat it, a Chocolatier found a unique way 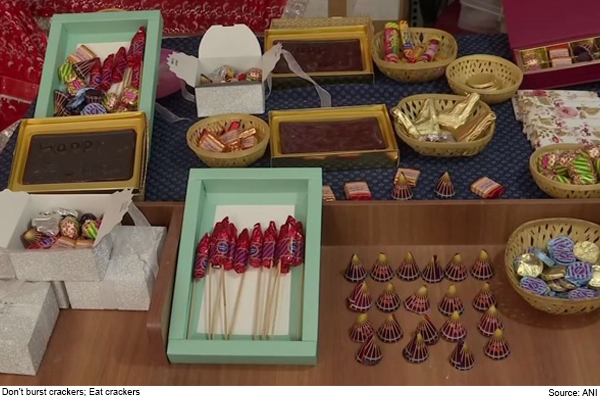 New Delhi: As the pollution level in the national capital continues to rise, the National Green Tribunal (NGT) has decided to impose a complete ban on firecracker sales in Delhi-NCR by 30 November. This decision has come at a time when the festive season has started and at this time the sale of firecrackers is at its peak. At the same time, there is an appeal to not burst firecrackers due to pollution in the whole country. Meanwhile, in Bangalore, Karnataka, a chocolate maker has found a unique method. He has taken out a chocolate in the name of fire crackers so that pollution can be reduced.

A Chocolatier based in Bengaluru in Karnataka told the news agency that before Diwali, he had come up with a new way not to ‘burst firecrackers’ but to ‘eat firecrackers’. They have named chocolate in addition to crackers such as rockets, twine bombs, Lakshmi crackers, flower pots and so on.

Explain that a bench headed by NGT President Justice Adarsh ​​Kumar Goel said, “Only green crackers can be sold in cities where ambient air quality is moderate. Festivals like Diwali, Chhath, New Year and Christmas Eve etc. can be specified by the respective state. With this order of the NGT, the ban on the sale of firecrackers has also been implemented in Gurgaon, Noida, Ghaziabad, Faridabad. The Haryana government had given an exemption for burning firecrackers for two hours, after which there was a confusion as to whether this exemption would be available in Gurgaon or not.

According to the NGT, there will be a complete ban on the use and sale of firecrackers in the states of the country in which air pollution remains in the category of ‘bad’. In cities where ambient air quality is moderate, only green crackers can be sold. It is ordered to give only two hours to fire crackers.