Home
States
Owaisi is Jinnah’s new avatar, every single vote cast for Owaisi is against India

Owaisi is Jinnah’s new avatar, every single vote cast for Owaisi is against India 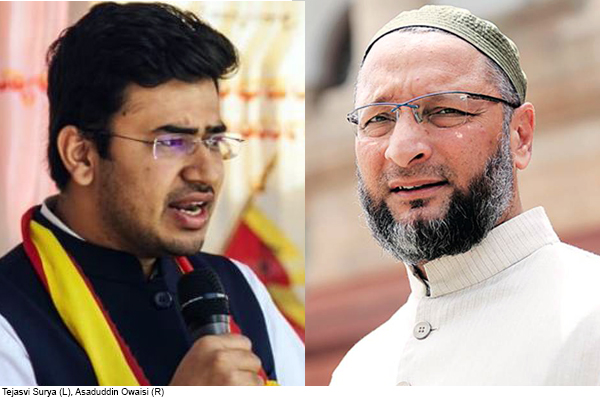 New Delhi: BJP leader Tejashwi Surya, while campaigning for Hyderabad Civic election, gave a highly disputed and divisive speech on Monday. Tejashwi called Owaisi an avatar of Mohammad Ali Jinnah. He said that every single vote cast for Owaisi is against India.

Accusing both Asaduddin Owaisi and his brother Akbaruddin Owaisi of ‘playing divisive and communal politics’, Bengaluru BJP MP Tejashwi Surya also accused the leaders of ‘Hyderabad’ that only Rohingya Muslims are allowed in Hyderabad, not development’.

He continued, “If you vote for Owaisi here, it becomes stronger in Muslim areas in Uttar Pradesh, Bihar, Maharashtra, Karnataka.” He questioned who Owaisi is? Owaisi is the new incarnation of Jinnah. We have to defeat him. Every single vote you give to BJP is for India, for Hindutva, for strengthening the country.

Surya said, “He (Asaduddin Owaisi) speaks the language of separatism and extremism, which Jinnah also spoke. Every Indian should stand against the divisive and communal politics of the Owaisi brothers. We will not allow this Islamization to happen, it is our resolve. “He said,” I want to tell Akbaruddin and Asaduddin Owaisi, this is not the time of Nizams. It is the time of Narendra Modi. You will not be able to do anything here. “The firebrand BJP MP called the Greater Hyderabad Municipal Corporation elections to be held on December 1, the BJP’s gateway to the south. Surya said, “Change Hyderabad today, change Telangana tomorrow, change South India after tomorrow. The whole country is watching Hyderabad. “

Tejasvi Surya also mocked Chief Minister Chandrashekhar Rao for promising to make Hyderabad Istanbul, saying he had an agreement with AIMIM, as he wanted to make the city ‘Hyderabad of Pakistan’.