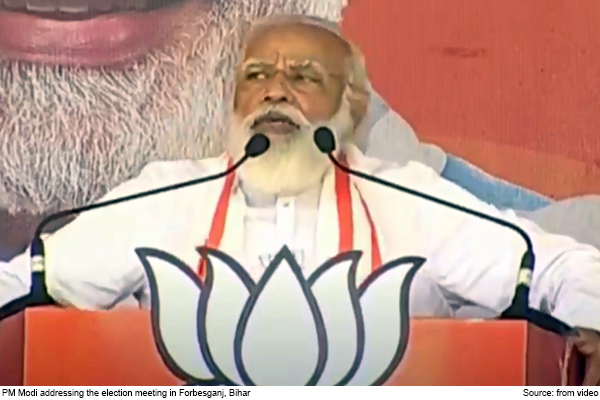 Patna: The voting for the first phase of the assembly elections in Bihar is over. Today the second phase of voting is going on. Meanwhile, PM Modi while addressing an election rally in Bihar said that the holy land of Bihar is determined to take Bihar to a new height in this new decade. The people of Bihar have rejected Jungle Raj, the double-double crowns. Today, those who are standing in opposition to the NDA, after having committed so much, are now again looking at Bihar with greed. But the people of Bihar know who is committed to the development of Bihar and who is for the development of their family.

Taking a dig at the opposition, the Prime Minister said that today the condition of the Congress is to merge the Lok Sabha and the Rajya Sabha, even then it does not have 100 MPs. Some people have trouble as to why Modi wins the election. Modi wins the election because Modi does the work of removing the anxiety of the mothers and sisters. Therefore, mothers continue to bless Modi. Therefore, this poor’s son spends his life in the service of the poor. Those who understand the problems of the poor, they work for the poor. People who build their palaces by making fools chanting garlands of the poor, people who build palaces for their distant relatives, cannot understand your pain. Today Bihar is going to greatly expand the gas grid connectivity in those few states of the country. Today Bihar is becoming a big beneficiary of Pradhan Mantri Urja Ganga Yojana.

He said that in Bihar, arrogance is losing, hard work is winning again. Today, the scam in Bihar is losing, the people’s right is winning again. Today, hooliganism is losing in Bihar, those who bring back the rule of law are winning again. Bihar cannot forget the day when these people had mocked the election. Election meant for these – violence, killings, booth capturing all around. These people had taken away even the right to vote from the poor of Bihar. Then there was no voting, ‘vote was taken, vote was robbed’, poor people’s right was robbed. The NDA has given the right to vote to the poor in Bihar.

The Prime Minister said that if the same situation happened in Bihar as before, then believe the truth, this son of a poor mother would never have become Prime Minister, could not have become your chief servant. Today, when the poor have got their rights, they have also taken the command to set the direction of the country’s politics. In the last decade, the effects of Jungle Raj have been reduced, now this decade is of the new flight of Bihar, of new possibilities. When Bihar will again get the power of double engine, the development here will be faster than before.

He said that by lying, the Congress showed the dreams of the people of the country. Before the elections, they used to say that we will remove poverty, forgive the debt of the farmer, reduce the tax. A lot of things have been done, but history is witness, documents are witness that they did not do any of it, only mislead people. Bihar has now identified those people whose only dream is to somehow seize power by spreading the rumors and intimidating people. This is his thinking for years, he has seen this, he has understood this, he has learned this.