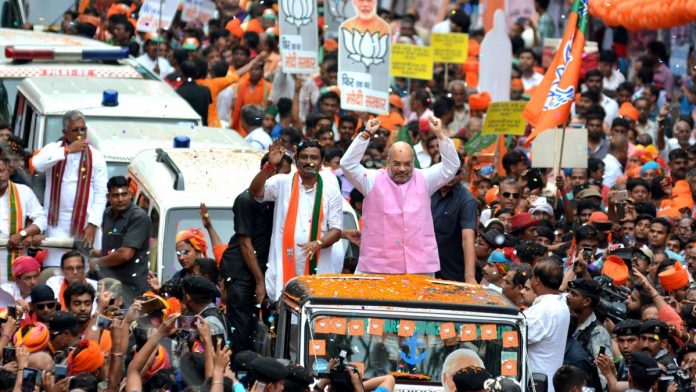 Targeting the Mamata Banerjee government, Union Minister Amit Shah on Sunday alleged that political violence in Bengal has reached its peak and that around 300 BJP workers have been killed during his tenure. Condemning the attack on BJP national president JP Nadda last week, he said that the BJP believes that in democracy, everyone should have the right to express their views. Speaking at a press conference in Bengal, he warned and said, “I want to tell all TMC leaders that they should not misconstrue politics, they think the BJP will be scared of such attacks.” We will work to establish our base in West Bengal. “

Overwhelmed by the huge crowd at his roadshow in Bolpur, Shah said that he had never seen such a roadshow in his life and this showed the love of PM Modi and anger towards Bengal Chief Minister Mamata Banerjee.

He also visited Visva-Bharati and paid tribute to Rabindranath Tagore at the Rabindra Bhavan on the university campus. Shah, who is on a two-day visit to West Bengal, paid floral tributes to Tagore at Ravindra Bhavan on the university campus. Amid tight security, the Home Minister arrived here on an over an hour visit to the Central University. He has also decided to hold a meeting with Vice-Chancellor Bidyut Chakraborty and faculty members.

Warning CM Banerjee, Shah said the BJP would win more than 200 seats in the state assembly elections to be held next year. Pointing out from TMC, Shah took potshots at the party chief, saying that CM Mamata Banerjee would be left alone in the party till the time of elections.

After several weeks of speculation, nine MLAs from different parties along with West Bengal political veteran Suvendu Adhikari and a TMC MP joined the BJP at Shah’s rally in Midnapore. The Home Minister visited Swami Vivekananda’s birthplace in North Kolkata on Saturday morning and said that the ideals of the 19th-century icon are more relevant in today’s times. He also visited the Siddheshwari Kali Temple at Habibpur and paid floral tributes to the revolutionary Khudiram Bose. He is scheduled to have lunch with a farmer family in Balichuri village with BJP leaders. After the public meeting, he will return to Kolkata and hold a meeting with BJP state leaders.

On Saturday, 34 other leaders, including veteran leader Shubhendu Adhikari and five MLAs, and an MP, joined the BJP in the presence of Union Home Minister Amit Shah in the event of the Trinamool Congress leaving the party in a day. Apart from Trinamool leaders, two CPI-M MLAs, CPI, and one MLA each of Congress also joined BJP.