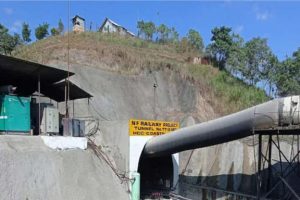 Presently the construction work is going on and if reports are to be believed, about 70 percent of its work has been completed. About 62 km of this railway line will pass through the tunnel being built under the North Frontier Railway. The government is planning to start operations by 2023.

This work is being done under National Capital Connectivity. The total length of this rail route is around 111 km, of which at least 62 km will pass through the tunnel. The total length of all the bridges on this line is 3.5 km. There will be 10 stations on the entire railway route.

Chief Engineer Rail Project, Sandeep Sharma said, “The 70.3 km section has been completed, and the remaining work will also be completed soon,” adding that the train operations will start by December 2023. “The biggest challenge was to build a tunnel. Under a 65-meter mountain of mud. Because there was a risk of accident at the time of excavation, there was also a risk of soil falling.

North Frontier Railway has faced various challenges in making this tunnel and 70 percent work has been completed.