Russia races ahead in anti-Covid fight, but doubts linger 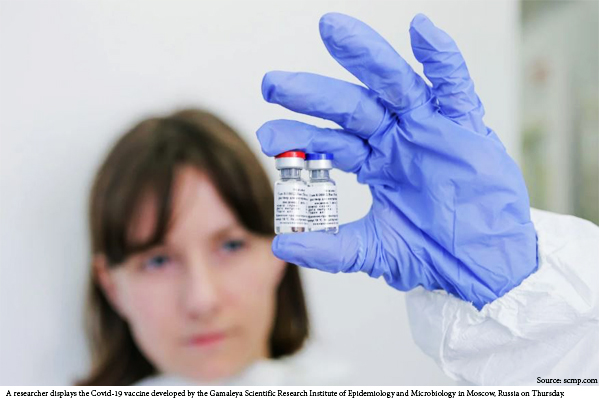 New Delhi: In spite of wondrous scepticism, Russia on Tuesday became the first country in the world to announce that it has given statutory approval for the public use of Covid-19 vaccine. Experts around the world have been startled after the announcement made by Russian President Vladimir Putin.

Director of All India Institutes of Medical Sciences (AIIMS), Delhi, Dr Randeep Guleria, on Tuesday said that there was a need to assess the safety and effectiveness of the vaccine developed by Russia.

“If Russia’s vaccine is successful, we will have to see critically whether it is safe and effective. There should not be any side-effects of the vaccine and it should provide good immunity and protection. India has the capacity for mass production of vaccine,” Dr Guleria said.

Earlier, Putin said that the vaccine offers sustainable immunity against Covid-19 and claimed his daughters had received the inoculation and felt good afterwards. However, the vaccine, named a ‘Sputnik V’ in homage to the world’s first satellite launched by the country, has not yet completed its final trials.

Top US infectious disease official Dr Anthony Fauci said he had not heard any evidence that the vaccine was ready for widespread use.

“I hope that the Russians have actually definitively proven that the vaccine is safe and effective. I seriously doubt that they’ve done that,” Fauci said.