Home
States
The City Of Ram: 6 Grand Gates Will Welcome Devotees To Ayodhya

The City Of Ram: 6 Grand Gates Will Welcome Devotees To Ayodhya 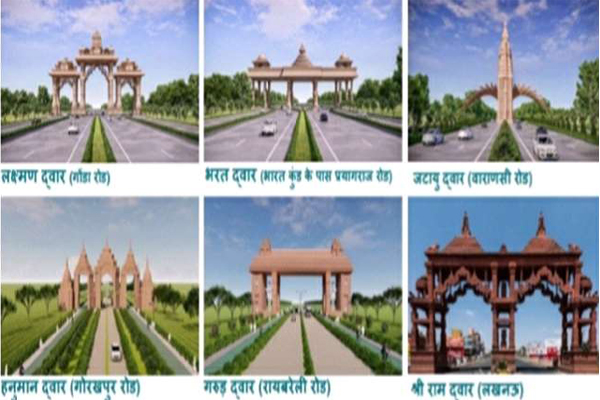 Lucknow: Prime Minister Narendra Modi had laid the foundation stone on August 5 last year. After that the process of construction of a grand Ram temple in Ramnagari Ayodhya had started. Its outline has been prepared in such a way that the people who come here are mesmerized. People entering Ayodhya from six districts will feel immense joy as soon as they reach the entrance gates. It is believed that this gateway will give a new identity to Ramnagari along with promoting religious tourism. Efforts are on to place the form of Ayodhya with nine gates described in Atharva Veda prominently in the reconstruction of Ramnagari. Right now, out of the nine gates, the construction of six gates has been prepared. Work is being done in the direction of making it a reality on the opinion of the saints regarding the reconstruction of Ramnagari. This hypothesis has found a place in the vision document.

For this, it is proposed to construct these gates on the routes connecting Ramnagari with Prayagraj, Gonda, Varanasi, Lucknow, Rae Bareli and Gorakhpur. These entrances are being designed keeping in mind the six lane, four lane and two lane roads. The estimated cost of one entrance is likely to be 10 to 15 crore rupees.

Global consultant agency Lee Associates has prepared its framework under the supervision of Development Authority Vice President Vishal Singh. The preliminary design of the entrance gates was prepared and presented in the review meeting of Chief Minister Yogi Adityanath recently. This design has not been finalized yet. According to the experts associated with the vision document, there are plans to build six gates now. The scope of construction of three more gates is being explored. Efforts will be made to construct these three gates in the near future. The entrance gates to be built in Dharmanagari will also be in the name of Lord Rama and his servants and associates.

The entrance gates are being designed keeping in mind the six-lane, four-lane and two-lane routes. These gates will be made of stones. The specialty of these rocks will be like the stones used in the Ram temple. The estimated cost of an entrance gate is ten to 15 crore rupees. Well-organized Dharamshalas will also be built near the entrance. Vishal Singh, Vice-Chairman of the Authority said that according to the intention of the Chief Minister, a roadmap is being prepared to develop Ramnagari as a spiritual city. In this sequence, six grand entrance gates are proposed to be constructed on the border of Ramnagari. Their design is being prepared.

Dharamshala will be built at these places
Between Mumtaznagar and Ghatampur on the 1-Lucknow road – 600 rooms
200 rooms in Mau Yaduvanshpur on Rae Bareli Marg
-200 rooms in Mainuddinpur on 3-Prayagraj Marg
4-250 rooms near Dashrath Samadhi Sthal on Azamgarh Road
Near Katra on 5-Gonda Marg – 370 rooms
6-Gorakhpur road-site selection process continues.