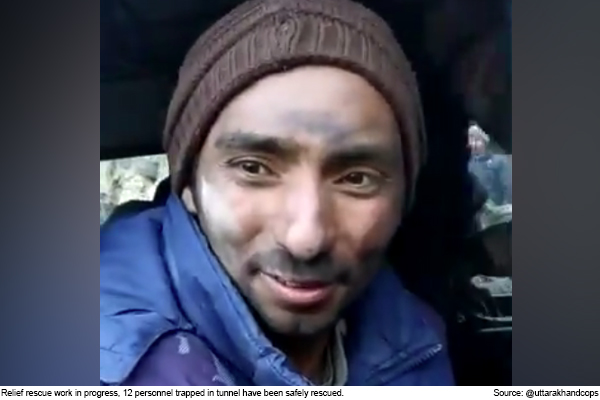 Dehradun: Around 125 laborers are missing after the massive floods caused by a glacier burst near Joshimath in Chamoli district of Uttarakhand, while 15 have been rescued.

The ITBP has been deployed in relief and rescue operations after the glacier bursting in the rivers. A labourer stranded in the tunnel after the glacier exploded heard his objection after the rescue, which was shared by the Uttarakhand police on Twitter.

ITBP personnel are working hard to get people trapped in the tunnels. After exiting the tunnel, a laborer reported that the debris was filled up to the neck in the tunnel. The rescued laborer said, “The debris inside the tunnel had come up to our neck, I myself have come out holding the sariya.” When asked if there was any panic in the tunnel, he said ‘no’ responded to.

It is to be known that due to the fall of a glacier, there was a sudden flood in the river Rishi Ganga on Sunday morning. The water current was so strong that the RishiGanga hydro project was completely destroyed. Also, 5 to 6 houses of the village were washed away in this flood. With this, an NTPC project on the Dhauli Ganga river near Tapovan was completely destroyed. Two suspension bridges connecting the villages on the other side of the river have also been washed away. Around 250 personnel from the Indo-Tibetan Border Police (ITBP), Army and NDRF teams are conducting rescue and relief operations along with search and rescue operations at the scene.