World Fisheries Day: CM Baghel initiative to give fisheries a status of farming 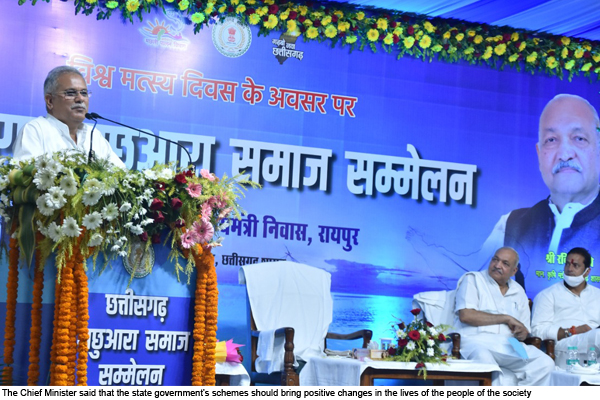 Raipur: Chief Minister Bhupesh Baghel has said that the state government will take initiative to give farming status to fisheries in Chhattisgarh. The state government has given instructions to the officials to plan for this. Like the farming, the Chief Minister said that the initiative of providing interest-free loans from the cooperative bank for fisheries and rebate to the Nishad, Kentish and Dhimar society people, like the rebate in electricity rates to farmers, Will. Chief Minister Baghel was addressing the conference of Chhattisgarh Fishermen Society organized on the occasion of World Fisheries Day at his residence office here today.

The Chief Minister said that the state government’s schemes should bring positive changes in the lives of the people of the society. The fishermen society is being given grant-in-aid in various schemes, but this has not changed their economic situation much. For this, it is necessary that Nishad, the quintet society should follow the scientific method of fish farming and manage the sale of the fish produced, it will not only improve the economic condition of the fishermen, but also Chhattisgarh ranks first in the country in fish production like paddy production. Will happen. The state government will provide all possible help to the people of the society in these areas also. He said that society should pay attention to the system of good education of children.

Also it should be kept in mind that children are mentally and physically strong. When children are educated and strong, they will be able to get their rights themselves. He said that it is the effort of the state government that every section can be strengthened financially. He also mentioned loan waiver of farmers, Rajiv Gandhi Kisan Nyaya Yojana, Godan Nyaya Yojana, purchase of minor forest produce at government price, distribution of forest rights pattas, English medium school scheme. Referring to the demand for reservation made by the society, Mr. Baghel said that it is a long process. The state government will also take initiative for this, but today is a phase of privatization. Public undertakings set up by former Prime Minister Pandit Jawaharlal Nehru and Mrs. Indira Gandhi are being given in private hands. Which will harm the country.

Presiding over the program, Agriculture and Water Resources Minister Ravindra Choubey said that every year one thousand youths of fishermen society will be distributed on motor cycle grant along with ice box. He said that the fishermen community should be included in the fishermen committee to be set up for fisheries, lest the fishermen society should work as laborers in the committee after getting the contract for fisheries and fish The contractor should benefit from the rearing business. He said that the fishermen’s federation should decide whether fisheries in Chhattisgarh should be done through Nishad, Fishermen’s Cooperative Society of the Kenwat Samaj, or like the policy of collecting tendu leaves in the state, the people working in the committee should get the wages and fisheries fixed by the government. Profit from business should be paid. The state government will make policy for this.

Home Minister Tamradhwaj Sahu said that the people of Dhria and Nishad community should meet the tariya, dams and ponds for fish farming. He said that under the leadership of Chief Minister Bhupesh Baghel, many new schemes have been started by the state government for all classes. In which efforts have been made to preserve the honor of every person with the upliftment of the people. He said that after the commencement of the Godhan Nyaya Yojana, many Gothans have become self-supporting in a very short time. Parliamentary Secretary Kunwar Singh Nishad stressed the need for the promotion of education in the society and said that no society can progress without education. Chhattisgarh State Fisheries Welfare Board Chairman M.R. Nishad demanded reservation in education and government service to the children of the society.

Agriculture Production Commissioner Dr. M. Geeta said in a welcome address that Chhattisgarh is also the leading state in the country in terms of fisheries production and fish seed production. During the last two rains, there has been a significant increase of 13 percent in fish seed production and 9 percent in fish production in the state. The project of one thousand cages has been approved in the state’s largest Hasdeo Bango reservoir. Director Fisheries Mr. V.K. Shukla thanked the guests at the end of the program. Representatives of fishermen society were present on this occasion in large numbers.