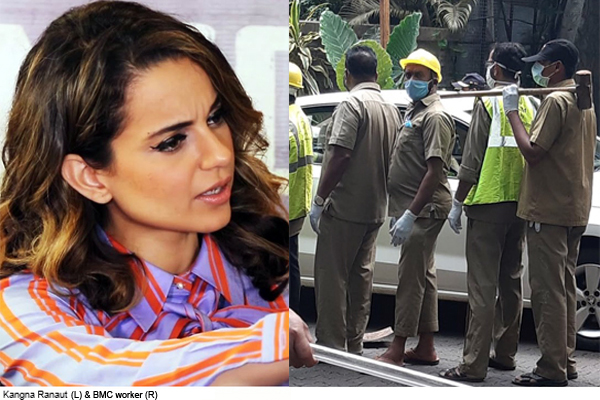 New Delhi: Actress Kangana Ranaut and Shiv Sena are not taking the name of the controversy. On one side, there is Kangana who keeps accusing the Shiv Sena by tweeting daily on Twitter. On the other hand, Shiv Sena and their leaders keep making some such statement, which is increasing rather than ending the dispute. Explain how the Shiv Sena is harassing Kangana through BMC, it has become well known. However, Sanjay Raut has said that Shiv Sena has nothing to do with this action. In this episode, BMC has on Sunday issued a new notice regarding Kangana’s house.

According to Zee News, this new notice has been sent regarding illegal construction done inside Kangana’s house in Khar, Mumbai. BMC says that Kangana’s house has been constructed illegally in violation of more rules than her office. Explain that earlier, the BMC, taking action on the illegal construction done in Kangana Ranaut’s Pali Hill office, had demolished some part of that office. Although the court has asked the BMC to stop the action till further orders, the BMC is now eyeing their Khar home.

Kangana Ranaut lives on the 5th floor of a building on No. 16 Road of Orchid Breeze in Khar West, Mumbai. Kangana has a total of 3 flats on this floor, one of which is 797 sq ft, the other is 711 sq ft and the other is 459 sq ft. At present, the case of illegal construction in Kangna’s house is in the court, which is to be heard on 25 September.