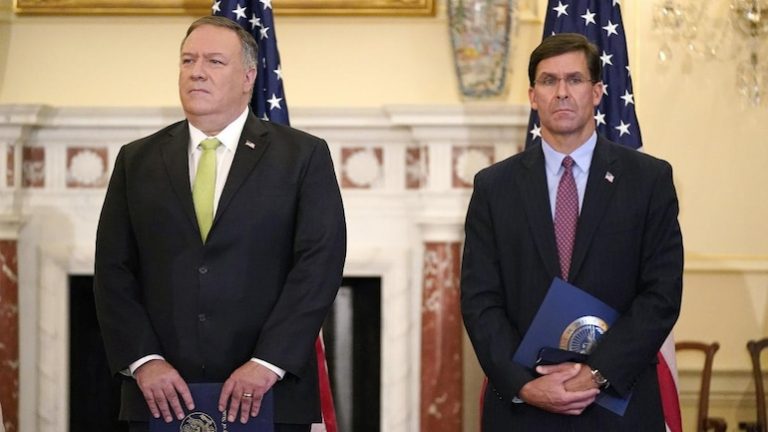 New Delhi: US Secretary of State Mike Pompeo arrived in New Delhi on Monday for the third edition of the 2+2 ministerial dialogue to be held in New Delhi. Pompeo was accompanied by wife Susan and Defence Secretary Mask Esper.

The Indian side at the talks will be represented by External Affairs Minister S Jaishankar. The high-level talks come amidst India’s festering border row with China in eastern Ladakh as well as the renewed global focus on the Indo-Pacific region. The timing is also significant as the dialogue comes just a week ahead of the US presidential election which is witnessing fiery political clashes between Republican Donald Trump and Democratic Joe Biden.

Pompeo is in India to participate in the third India-US 2+2 Ministerial Dialogue tomorrow.

The two sides are expected to explore ways to bolster bilateral defence ties and security cooperation in the Indo-Pacific, amidst China flexing its muscles in the strategic region. Several world powers including India and the US have been talking about the need to ensure a free, open and thriving Indo-Pacific in the backdrop of China’s rising military maneuvering in the region.

It is expected that India and the US may finalise the long-pending BECA (Basic Exchange and Cooperation Agreement) agreement to further boost bilateral defence ties. The BECA will provide for sharing of high-end military technology, logistics and geospatial maps between the two countries.

The first edition of the 2-plus-2 dialogue took place in Delhi in September 2018 after the mechanism was approved by Prime Minister Narendra Modi and President Donald Trump.

The second edition was held in Washington in December last year. The new framework of the ministerial dialogue was initiated in order to provide a forward-looking vision for the strategic partnership between the two countries.